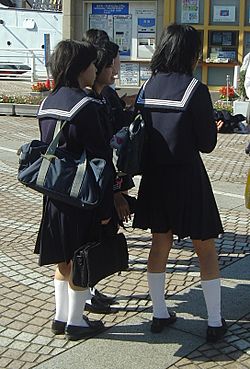 Uniforms are special clothes to show that a group of people belong together. The group of people will all be dressed in the same way ("uni" means "one", and form means "shape" one shape).

People may wear uniforms for several reasons. The uniform will help the people to feel a team spirit so that they work well together. They may also help members of the public to know who they are, e.g. in a department store a customer can tell who is a member of staff, or in the street people will recognize a police officer. Uniforms may also be worn because they are practical, e.g. it might keep them safe when operating machinery or keep them clean when doing their work.

In the army soldiers wear uniform. They also wear extra things such as badges on their uniform which show how important they are (what rank they are).

In some countries such as India, Japan, China, Korea, Australia and United Kingdom many school children wear uniform. The uniform would be a set of clothes with the school crest or symbol. It helps them to feel proud of their school and children from rich families and poor families all look the same. In Britain, for example, most young children wear school uniform. In state schools the children may wear polo-necked T shirts with a school logo. Other schools, especially private schools, may have a formal uniform, or they may be free to choose their own clothes so long as they are the school colour.

All content from Kiddle encyclopedia articles (including the article images and facts) can be freely used under Attribution-ShareAlike license, unless stated otherwise. Cite this article:
Uniform Facts for Kids. Kiddle Encyclopedia.