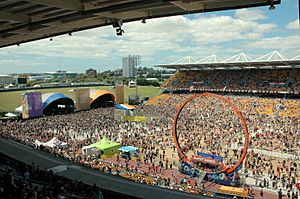 The 2007 Big Day Out music festival

A music festival is a festival where music is played. Music festivals are usually outside, and often have other attractions such as food, games, and other forms of entertainment. They sometimes have a theme such as genre or nationality. Many festivals happen every year, or at some other common interval. However, some only happen once. A music festival can be held for profit or for charity.

All content from Kiddle encyclopedia articles (including the article images and facts) can be freely used under Attribution-ShareAlike license, unless stated otherwise. Cite this article:
Music festival Facts for Kids. Kiddle Encyclopedia.