Katowice is a city in southern Poland, with a city-proper population of 297,197 making it the eleventh-largest city in Poland and is the center of the Katowice metropolitan area, which has approximately 2 million people.

Throughout the mid-18th century, Katowice had developed into a village upon the discovery of rich coal reserves in the area. In 1742 the First Silesian War transferred Upper Silesia, including Katowice, to Prussia. Subsequently, from the second half of the 18th century, many German or Prussian craftsmen, merchants and artists began to settle in the region, which had been inhabited mostly by Poles over the past hundreds of years.

In the first half of the 19th century, intensive industrialization transformed local mills and farms into industrial steelworks, mines, foundries and artisan workshops. This also contributed to the establishment of companies and eventual rapid growth of the city. At the same time, Katowice became linked to the railway system with the first train arriving at the main station in 1847.

The outbreak of World War I was favourable for Katowice due to the prospering steel industry. Following Germany's defeat and the Silesian Uprisings, Katowice and parts of Upper Silesia were annexed by the Second Polish Republic. On 3 May 1921, the Polish army entered Katowice and the Polish administration took control. In 1939, after the Wehrmacht seized the town, Katowice and the provinces were incorporated into the Third Reich. The town was eventually liberated by the Allies on 27 January 1945.

Katowice is a center of science, culture, industry, business, trade, and transportation in Upper Silesia and southern Poland, and the main city in the Upper Silesian Industrial Region. Today, the city is considered as an emerging metropolis. The whole metropolitan area is the 16th most economically powerful city by GDP in the European Union with an output amounting to $114.5 billion.

Katowice is the seat of the Polish National Radio Symphony and Orchestra. It also hosts the finals of Intel Extreme Masters, an Esports video game tournament. In 2015, Katowice joined the UNESCO Creative Cities Network and was named a UNESCO City of Music. 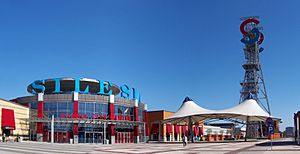 Katowice is a large coal and steel center. It has several coal mines (Wujek Coal Mine, Mysłowice-Wesoła Coal Mine, Wieczorek Coal Mine, Murcki Coal Mine, Staszic Coal Mine) organized into unions—Katowice Coal Holding company, two steelworks (Huta Baildon, Huta Ferrum), and one foundry of non-ferrous metals.

Katowice is a large business and trade fair center. Every year in Katowice International Fair and Spodek, tens of international trade fairs are organized. Katowice has the second largest business centre in Poland. Skyscrapers stand along Chorzowska, Korfantego and Roździeńskiego street in the centre.

The unemployment rate is one of the lowest in Poland. The city is still characterized by its working class strength and attracts many people from neighbouring cities seeking jobs.

Katowice is the cultural centre of the entire Silesian agglomeration inhabited by over two million people and one of the leading cultural spots in Poland. Most importantly, it is a host city to some of the biggest theatrical and stage events. This also includes hosting gatherings and exhibitions well as film and musical events. Annual musical festivals such as the Rawa Blues, the Tauron New Music Festival, the Silesian Jazz Festival, the Mayday Festival and other concerts, which attract yearly hundreds of thousands of tourists from the entire country. Katowice also temporarily hosts the OFF Festival, the most important alternative event in Poland.

Katowice is the seat of an internationally renowned Karol Szymanowski Academy of Music, as well as the Polish National Radio Symphony Orchestra. The Silesian Philharmonic also has its seat in Katowice. The opening of a new architectural complex of the National Polish Radio Orchestra took place in 2014.

A showcase for Katowice is the "Camerata Silesia" - an ensemble aimed at promoting the city in Poland and overseas. Classical music also plays significant role in Katowice and the city annually becomes a venue for numerous classical concerts and festivals. The list includes an International Festival of Young Music Competition Laureates, The Grzegorz Fitelberg International Competition for Conductors, Chamber Music Festival, Ars Cameralis Festival and Katowice's opera, operettas and most of all ballet. In 2010, as part of the Chopin Year Celebrations, Katowice held the International Chopin Knowledge Challenge, which took place at the Spodek hall.

The BWA Contemporary Art Gallery in Katowice, established in 1949, is a notable institution concerning the contemporary arts. Every three years, it is responsible for the organisation of the Polish Graphic Art Triennial. Several other galleries feature exhibitions of the works by artists from abroad alongside with film screenings, workshops for children and public fairs. The Silesian Museum in Katowice, opened in 1929, exhibits works by famous and renowned Polish artists like Józef Chełmoński, Artur Grottger, Tadeusz Makowski, Jacek Malczewski, Jan Matejko, Józef Mehoffer and Stanisław Wyspiański.

New complex of the Silesian Museum with an original mine headframe

Exhibition hall of the museum

All content from Kiddle encyclopedia articles (including the article images and facts) can be freely used under Attribution-ShareAlike license, unless stated otherwise. Cite this article:
Katowice Facts for Kids. Kiddle Encyclopedia.