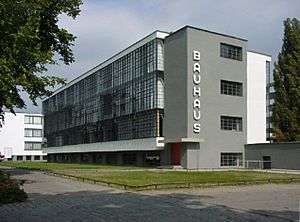 The Bauhaus was a design school that operated from 1919 to 1933 in Germany. It is widely regarded as the most influential art school of the 20th century. It promoted modernism. It is most well known for teaching painting, photography, advertising, weaving, architecture and the design of furniture and household products. The work that it produced and its teaching methods had a world-wide influence on art, design, photography, architecture and art education.

Its former buildings in Weimar and Dessau were jointly made a UNESCO World Heritage Site in 1996.

All content from Kiddle encyclopedia articles (including the article images and facts) can be freely used under Attribution-ShareAlike license, unless stated otherwise. Cite this article:
Bauhaus Facts for Kids. Kiddle Encyclopedia.