Josef Albers (March 19, 1888 – March 25, 1976) was a German-born American artist and educator whose work, both in Europe and in the United States, formed the basis of modern art education programs of the twentieth century. His work in Europe and the United States was highly influential and far-reaching. His ideas formed the basis of many art education programs in the 20th century. 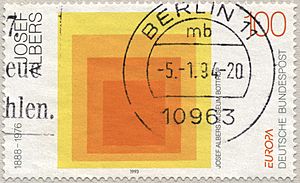 Albers on a postage stamp

Albers was born in Bottrop, Westphalia (Germany). He studied art in Berlin, Essen, and Munich, before enrolling as a student at the prestigious Weimar Bauhaus in 1920. He began teaching in the preliminary course of the Department of Design in 1922, and was promoted to Professor in 1925, the year the Bauhaus moved to Dessau. His work at this time included designing furniture and working with glass.

Albers is best remembered for his work as an abstract painter and theorist. Most famous of all are the hundreds of paintings and prints that make up the series Homage to the Square. In this rigorous series, begun in 1949, Albers explored chromatic interactions with flat colored squares arranged inside each other. This was a union of geometric abstraction with experiments in color.

All content from Kiddle encyclopedia articles (including the article images and facts) can be freely used under Attribution-ShareAlike license, unless stated otherwise. Cite this article:
Josef Albers Facts for Kids. Kiddle Encyclopedia.