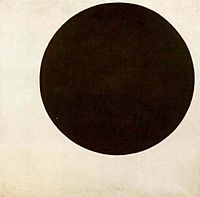 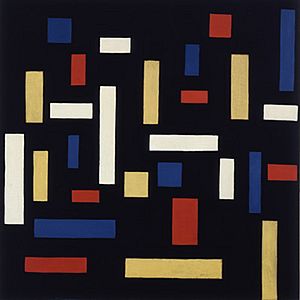 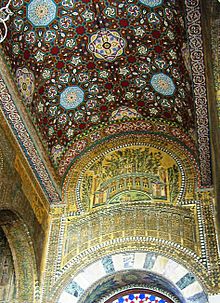 Geometric, but not simple: Painted ceiling of the Umayyad Mosque, Damascus

Broken Obelisk by Barnett Newman is in the grounds of Rothko Chapel, Houston.

Geometric abstraction is a form of abstract art based on the use of geometric forms in non-representational compositions. This art is not meant to depict our everyday visual world, but instead uses the shapes of basic geometry.

Wassily Kandinsky, one of the forerunners of pure non-objective painting, was among the first modern artists to explore this geometric approach in his abstract work. Other examples of pioneer abstractionists such as Kazimir Malevich and Piet Mondrian have also embraced this approach towards abstract painting.

Geometric abstraction is not just an invention of 20th century avant-garde artists or movements. It is present in many cultures throughout history both as decorative motifs and as art pieces themselves.

Islamic art, in its prohibition of depicting religious figures, is a prime example of this geometric pattern-based art. It existed centuries before the modern movement in Europe, and in many ways influenced this Western school. Geometric patterns were often used in the architecture of Islamic civilisations from the 7th century-20th century, to visually connect spirituality with science and art.

Abstract art has also historically been likened to music in its ability to convey emotional or expressive feelings and ideas without reliance upon or reference to recognizable objective forms already existent in reality. Wassily Kandinsky has discussed this connection between music and painting, as well as how the practice of classical composition had influenced his work, at length in his seminal essay Concerning the Spiritual in Art.

Expressionist abstract painting, as practiced by artists such as Jackson Pollock, is the opposite of geometric abstraction.

All content from Kiddle encyclopedia articles (including the article images and facts) can be freely used under Attribution-ShareAlike license, unless stated otherwise. Cite this article:
Geometric abstraction Facts for Kids. Kiddle Encyclopedia.