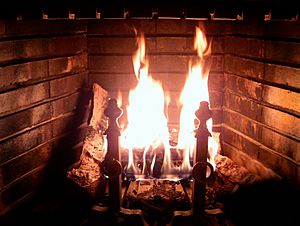 A fireplace is a brick or metal structure used to hold a fire. Fireplaces are most often used for heating but they can also be used for cooking. The part of the fireplace that holds the fire is called a firebox or a firepit. There is a chimney or flue above the firebox that lets the smoke from the fire go outside.

All content from Kiddle encyclopedia articles (including the article images and facts) can be freely used under Attribution-ShareAlike license, unless stated otherwise. Cite this article:
Fireplace Facts for Kids. Kiddle Encyclopedia.