1271 Avenue of the Americas facts for kids

1271 Avenue of the Americas is a 48-story office building located in Rockefeller Center in New York City. It opened in 1959 as the Time & Life Building, designed by architect Wallace Harrison, of Harrison, Abramovitz, and Harris.

1271 Avenue of the Americas was the first of four in Rockefeller Center designed by Harrison, Abramovitz, & Harris on the west side of Sixth Avenue. Harris served as the building's project manager and was responsible for overall planning. The Time & Life Building was the first expansion of Rockefeller Center west of the Avenue of the Americas. Air rights were purchased from the Roxy Theatre to the west. The Roxy was torn down in 1960 to erect an office tower connected to the Time & Life Building.

Construction on the Time-Life Building's steelwork started in April 1958, and the structure topped out in November of that year. The cornerstone of the building was laid in June 1959, after the building's structure had been completed, and the first tenants began moving into the tower in December 1959.

In July 2002, the building's ground floor interior was made an interior landmark by the New York City Landmarks Preservation Commission.

In May 2014, Time Inc announced that the company was planning to leave the Time & Life Building for the Brookfield Place complex in lower Manhattan.

The building is clad in green glass and features column-free floors of 28,000 square feet (2,600 m2). Large murals by Josef Albers and Fritz Glarner adorn its lobby, which integrates a serpentine patterned sidewalk design found on the sidewalks of Rio de Janeiro's Copacabana Beach with the adjacent sidewalk, a tribute to its location along Avenue of the Americas.

The Hemisphere Club, a members-only restaurant during the day, was on the 48th floor. Tn the evenings it opened to the public as the Tower Suite. The restaurant was operated by Restaurant Associates, which also operated The Four Seasons Restaurant, La Fonda del Sol, The Rainbow Room, The Forum of the Twelve Caesars, and later Windows on the World. The Hemisphere Club closed sometime after 1991.

La Fonda del Sol was a Latin American–themed restaurant opened in the Time & Life Building's lobby in 1960 by Joseph Baum. It featured bright, colorful, whimsical interiors designed by Alexander Girard and furniture by Charles Eames. It closed in 1971 and was replaced with a Fidelity Investments branch.

In addition to furniture for the La Fonda del Sol restaurant, Charles Eames designed iconic chairs for the offices of Time Incorporated which have become known as Time-Life Chairs. Eames designed them as a favor to Henry Luce, who had allowed Eames to use photos from the Time-Life archives for the pavilion he designed at the 1959 American National Exhibition in Moscow. The chairs remain in production and popular to this day, manufactured by Herman Miller of Zeeland, MI, though the original design with four legs at the base has been revised to include a fifth leg, referred to as a 5 star-base, for stability and to meet updated codes. 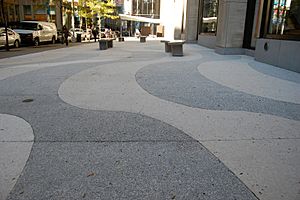 1271 Avenue of the Americas Sidewalk

All content from Kiddle encyclopedia articles (including the article images and facts) can be freely used under Attribution-ShareAlike license, unless stated otherwise. Cite this article:
1271 Avenue of the Americas Facts for Kids. Kiddle Encyclopedia.