Kassel (spelled Cassel until 1928) is a city located on the Fulda River in northern Hesse, Germany and has 200,507 inhabitants in December 2015. The former capital of the state of Hesse-Kassel has many palaces and parks, including the Bergpark Wilhelmshöhe, which is a UNESCO World Heritage Site. Kassel is also known for the documenta exhibitions of contemporary art. 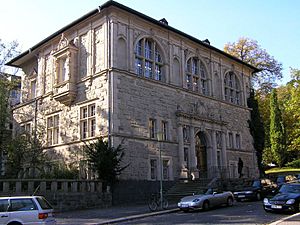 Kassel was first mentioned in 913 AD, as the place where two deeds were signed by King Conrad I. The place was called Chasella or Chassalla and was a fortification at a bridge crossing the Fulda river. A deed from 1189 certifies that Cassel had city rights, but the date when they were granted is not known.

In 1567, the Landgraviate of Hesse, until then centered in Marburg, was divided among four sons. Kassel was its capital and became a centre of Calvinist Protestantism in Germany. Strong fortifications were built to protect the Protestant stronghold against Catholic enemies. Secret societies, such as Rosicrucianism flourished. In 1685, Kassel became a refuge for 1,700 Huguenots. In the late 18th Century, Hesse-Kassel became infamous for selling mercenaries (Hessians) to the British crown to help suppress the American Revolution and to finance the construction of palaces and the Landgrave’s opulent lifestyle. 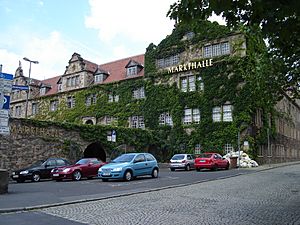 In the early 19th century, the Brothers Grimm lived in Kassel. They collected and wrote most of their fairy tales there. Having sided with Austria in the Austro-Prussian War to gain supremacy in Germany, the principality was annexed by Prussia in 1866. The Prussian administration united Nassau, Frankfurt and Hesse-Kassel into the new Prussian province of Hesse-Nassau. Kassel ceased to be a princely residence, but soon developed into a major industrial centre, as well as a major railway junction. Henschel & Son, the largest railway locomotive manufacturer in Germany at the end of the nineteenth century, was based in Kassel. 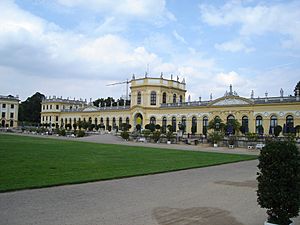 During World War II, Kassel was the headquarters for Germany's Wehrkreis IX, and a local subcamp of Dachau concentration camp provided forced labour for the Henschel facilities, which included tank production plants. The most severe bombing of Kassel in World War II destroyed 90% of the downtown area, some 10,000 people were killed, and 150,000 were made homeless. Most of the casualties were civilians or wounded soldiers recuperating in local hospitals, whereas factories survived the attack generally undamaged.

The Allied ground advance into Germany reached Kassel at the beginning of April 1945. The US 80th Infantry Division captured Kassel in bitter house-to-house fighting during 2–4 April 1945 and resulted in further widespread devastation to bombed and unbombed structures alike. Post-war, most of the ancient buildings were not restored, and large parts of the city area were completely rebuilt in the style of the 1950s. A few historic buildings, however, such as the Museum Fridericianum were restored. 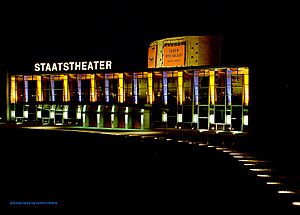 In 1558, the first German observatory was built in Kassel, followed in 1604 by the Ottoneum, the first permanent German theatre building. The old building is today the Natural History Museum, and the now-called Staatstheater Kassel is located in a nearby building that was constructed in the 1950s. Since 1927, Kassel has been home to Bärenreiter, one of the world's most important music publishers.

Since 1955 the Documenta, an international exhibition of modern and contemporary art, has been held regularly in Kassel. The Documenta now takes place every 5 years. As a result of the Documenta 6 (1977), Kassel became the first town in the world to be illuminated by laser beams at night . This laser installation is nowadays still visible at weekends. Other Documenta remnants (mainly sculptures) can be found in many places in Kassel. 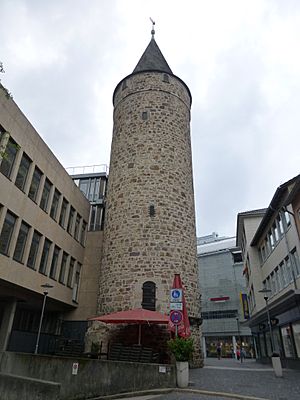 The bombing raids of 1943 destroyed 90% of the city centre. The city was almost completely rebuilt during the 1950s and is a combination of renovated or reconstructed old buildings and architecture of the 1950s. Outside the city centre, the suburbs are dominated by 19th-century architecture. The oldest monument is the Druselturm; the Brüderkirche and the Martinskirche are also, in part, of medieval origin. The towers of the Martinskirche are from the 1950s.

Bergpark Wilhelmshöhe is a landscape park in Kassel, Germany. The area of the park is 2.4 square kilometres, making it the largest European hillside park, and second largest park on a hill slope in the world. The complex includes Wilhelmshöhe Palace (with the Antiquities Collection and Old Masters), the Hercules monument, and the Lions Castle.

Wilhelmshöhe Palace above the city, was built in 1786 by Wilhelm IX of Hesse-Kassel. The palace is now a museum and houses an important collection of Graeco-Roman antiques and a fine gallery of paintings comprising the second largest collection of Rembrandts in Germany. It is surrounded by the beautiful Bergpark Wilhelmshöhe with many appealing sights. The complex was named a UNESCO World Heritage Site in 2013. 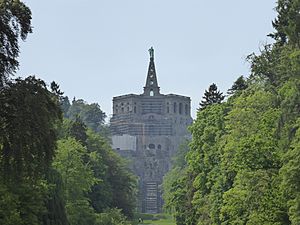 The Hercules monument is a huge octagonal stone structure carrying a giant replica of Hercules "Farnese". From its base down to Wilhelmshöhe Palace runs a long set of artificial cascades which delight visitors during the summer months. Every Sunday and Wednesday afternoon at 14:30 (from May until October) the famous water features take place. They start at the Oktagon and during a one-hour walk through the park visitors can follow the water's way until they reach the lake of the Wilhelmshöhe Palace, where a fountain of about 50 metres (160 ft) marks the end of the spectacle. 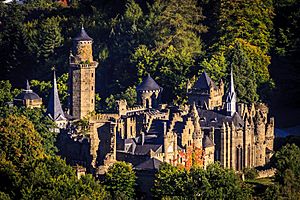 The Löwenburg ("Lions Castle") is a replica of a medieval castle, also built during the reign of Wilhelm IX. After the Franco-Prussian War of 1870/71 Napoléon III was imprisoned in Wilhelmshöhe.

Another large park and also part of the European Garden Heritage Network is the Karlsaue along the Fulda River. Established in the 16th century, it is famous for the Orangerie, a palace built in 1710. Today, the Orangerie contains the Museum of Astronomy and Technology, with a scale model of the Solar System spanning the entire park and beyond. In addition, the Park Schönfeld contains a small, municipal botanical garden, the Botanischer Garten Kassel. 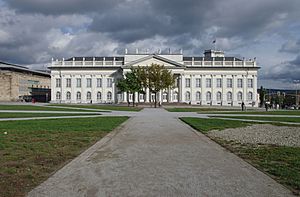 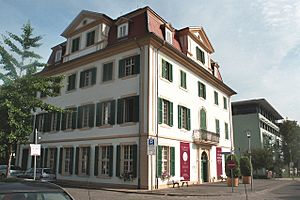 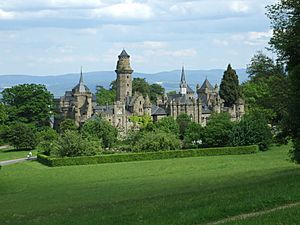 All content from Kiddle encyclopedia articles (including the article images and facts) can be freely used under Attribution-ShareAlike license, unless stated otherwise. Cite this article:
Kassel Facts for Kids. Kiddle Encyclopedia.