Joseph Beuys (12 May 1921 – 23 January 1986) was a German Fluxus, happening, and performance artist as well as a sculptor, installation artist, graphic artist, art theorist, and pedagogue.

His extensive work is grounded in concepts of humanism, social philosophy and anthroposophy; it culminates in his "extended definition of art" and the idea of social sculpture as a gesamtkunstwerk, for which he claimed a creative, participatory role in shaping society and politics. His career was characterized by open public debates on a very wide range of subjects including political, environmental, social and long term cultural trends. He is widely regarded as one of the most influential artists of the second half of the 20th century.

In 1979, a large retrospective of Beuys' work at the Guggenheim Museum in New York City confirmed his reputation as one of the most important artists of his time. He died in 1986 in Düsseldorf. 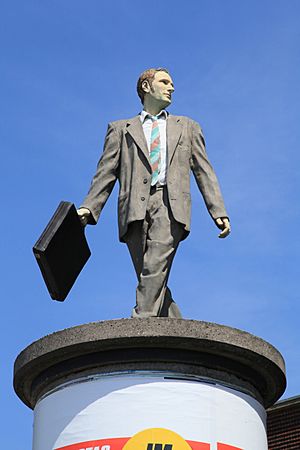 Beuys was born in Krefeld on 12 May 1921, but grew up in the nearby city of Kleve. His family was profoundly catholic. As a young child he began his interest in art by often engaging in making watercolours. He first saw modern art when visiting the studio of Achilles Moortgat. At the age of seventeen in 1938, he joined Hitler Youth, like many young German men at that time.

He studied many disciplines before engaging in his art practice, and was particularly interested in natural sciences and history, including alchemy, and focused on medicine with the intention of becoming a doctor. During his studies, however, World War II began, and he became a soldier in the German air force. There, he was a rear gunner (gunner in the back) in a military airplane.

After the war Beuys studied at the academy in Düsseldorf from 1946 to 1951. For most of the 1950s he was mostly drawing. In 1961 he became professor of sculpture there, but was fired in 1972 because he said that his classes must be open to anybody who wanted to take them. He thought that classes should be free and he worked in his classes with everybody who wanted. His students protested when he was fired, so he was allowed to hold his studio there, but he still lost his job.

Beuys believed that arts has an important rule in society. His first problems with politicians were when he lost his job as professor. In the 1980s he was part of the Peace Movement and protested against nuclear missiles in Germany. He was one of the first members of the Green Party in the 1980s. 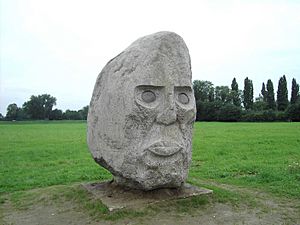 The first works Franz Joseph and Hans van der Grinten bought from Joseph Beuys in 1951 cost what would be equivalent today to €10 each. Beginning with small woodcuts, they purchased about 4,000 works and created what is now the largest Beuys collection in the world.

Since his death, Beuys' artworks have shifted in price, sometimes not even selling. At auction, the top price paid for a Beuys work is $900,000 (hammer price) for a bronze sculpture titled Bett (Corsett, 1949/50) at Sotheby's New York in May 2008.

The artist produced slightly more than 600 original multiples in his lifetime. Large sets of multiples are in the collections of the Pinakothek der Moderne in Munich, Germany, Harvard University Art Museums in Cambridge, Massachusetts, the Walker Art Center in Minneapolis, and the Kunstmuseum Bonn, Germany. In 2006, the Broad Art Foundation in Los Angeles acquired 570 multiples by Beuys, thereby becoming the most complete collection of Beuys works in the United States and one of the largest collections of Beuys multiples in the world.

All content from Kiddle encyclopedia articles (including the article images and facts) can be freely used under Attribution-ShareAlike license, unless stated otherwise. Cite this article:
Joseph Beuys Facts for Kids. Kiddle Encyclopedia.