The collections include approximately 250,000 objects in all media, ranging in date from antiquity to the present and originating in Europe, North America, North Africa, the Middle East, South Asia, East Asia, and Southeast Asia.

In 2008, the Harvard Art Museums' historic building at 32 Quincy Street, Cambridge, was closed for a major renovation and expansion project. During the beginning phases of this project, the Arthur M. Sackler Museum at 485 Broadway, Cambridge, displayed selected works from the collections of the Fogg, Busch-Reisinger, and Sackler museums from September 13, 2008 through June 1, 2013.

The renovated building at 32 Quincy Street unites the three museums in a single state-of-the-art facility designed by architect Renzo Piano, which increases gallery space by 40% and adds a glass, pyramidal roof. In a view of the front facade, the glass roof and other expansions are mostly concealed, largely preserving the original appearance of the building. The renovation was supervised by LeMessurier Consultants and Silman Associates.

The renovation adds six levels of galleries, classrooms, lecture halls, and new study areas providing access to parts of the 250,000-piece collection of the museums. The new building was opened in November 2014. 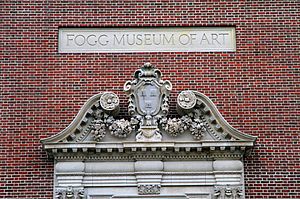 The Fogg Museum, opened to the public in 1896, is the oldest and largest component of the Harvard Art Museums.

The museum was originally housed in an Italian Renaissance-style building designed by Richard Morris Hunt. According to Donald Preziosi, the museum was not initially established as a gallery for the display of original works of art, but was founded as an institution for the teaching and study of visual arts, and the original building contained classrooms equipped with magic lanterns, a library, an archive of slides and photographs of art works, and exhibition space for reproductions of works of art. In 1925, the building was replaced by a Georgian Revival-style structure on Quincy Street, designed by Coolidge, Shepley, Bulfinch, and Abbott. (The original Hunt Hall remained, underutilized until it was demolished in 1974 to make way for new freshman dormitories.)

The Fogg Museum is renowned for its holdings of Western paintings, sculpture, decorative arts, photographs, prints, and drawings from the Middle Ages to the present. Particular strengths include Italian Renaissance, British Pre-Raphaelite, and French art of the 19th century, as well as 19th- and 20th-century American paintings and drawings.

Founded in 1901 as the Germanic Museum, the Busch–Reisinger Museum is the only museum in North America dedicated to the study of art from the German-speaking countries of Central and Northern Europe in all media and in all periods. William James spoke at its dedication. Its holdings include significant works of Austrian Secession art, German expressionism, 1920s abstraction, and material related to the Bauhaus design school. Other strengths include late medieval sculpture and 18th-century art. The museum also holds noteworthy postwar and contemporary art from German-speaking Europe, including works by Georg Baselitz, Anselm Kiefer, Gerhard Richter, and one of the world's most comprehensive collections of works by Joseph Beuys. 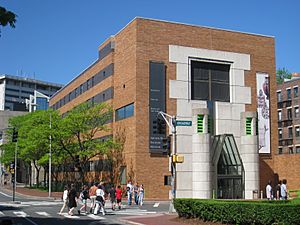 The Sackler Building is no longer used for public exhibition spaces

The Arthur M. Sackler Museum opened in 1985. The museum building, which was designed by British architect James Stirling, was named for the major donor, Arthur M. Sackler, a psychiatrist, entrepreneur, and philanthropist. The museum also housed offices for the History of Art and Architecture faculty, as well as the Digital Images and Slides Collection of the Fine Arts Library. As of 2016[update], the old Sackler Museum building houses the History of Art and Architecture Department and the Media Slide Library.

The museum also holds works on paper from Islamic lands and India, including paintings, drawings, calligraphy, and manuscript illustrations, with particular strength in Rajput art, as well as important Islamic ceramics from the 8th through to the 19th century.

The Sackler Museum, originally designed as an extension to the Fogg, elicited worldwide attention from the time of Harvard's commission of Stirling to design the building, following a selection process that evaluated more than 70 architects. As a measure of the excitement generated by the project, the University mounted an exhibition of the architects' preliminary design drawings in 1981, James Stirling's Design to Expand the Fogg Museum and issued a portfolio of Stirling's drawings to the press.

After completion, the building's coverage was even greater, with general acknowledgment of the building's significance as a Stirling design and a Harvard undertaking. Stirling employed an inventive design in an effort to let the museum peacefully co-exist with neighboring buildings in an area that he termed "an architectural zoo". Harvard published a 50-page book on the Sackler, with extensive color photos by Timothy Hursley, an interview with Stirling by Michael Dennis, a tribute to Arthur M. Sackler, and essays by Slive, Coolidge and Rosenfield.

In spite of global critical acclaim, a few have been critical, Martin Peretz even proposing demolition, though his case was undermined by mis-attributing the building to another British architect, Norman Foster.

As of 2013[update], the future use of the building was unclear, as its collection has been relocated to the Renzo Piano extension to the Fogg. Stirling's structure still stands as of December 2016[update]. Since 1984, the building has housed the University's department of the History of Art + Architecture, with building renovations being completed in early 2019 to better accommodate the faculty and students.

All content from Kiddle encyclopedia articles (including the article images and facts) can be freely used under Attribution-ShareAlike license, unless stated otherwise. Cite this article:
Harvard Art Museums Facts for Kids. Kiddle Encyclopedia.