Edvard Munch (12 December 1863 – 23 January 1944) was a Norwegian painter and print-maker. He was born in Adalsbruk. He was an expressionist who painted 1789 known paintings. He is well known for his treatment of emotion such as fear. His way of seeing things had a large influence on the expressionism of the 20th century. People saw this treatment as being intense.

During his life, he had success as a painter: He became famous outside Norway, and his paintings got high prices. The National Gallery (Norway) used much money to buy paintings by Munch. He painted large murals in the aula (main room) of Norway's (then) only university. 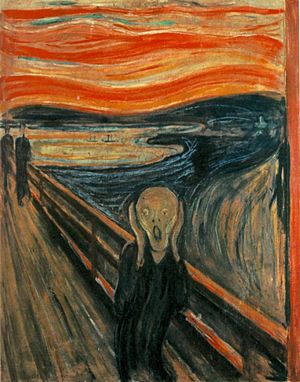 The Scream. 1893. Oil, tempera, and pastel on cardboard. Nasjonalgalleriet, Oslo 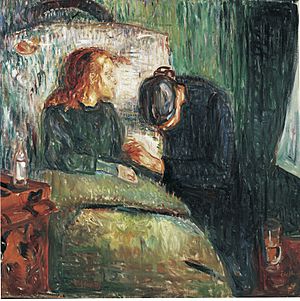 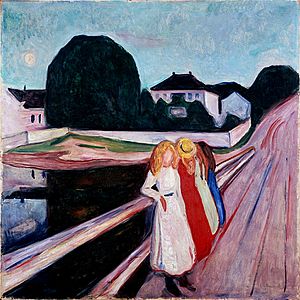 The Scream (1893; originally called Despair). This is Munch's best-known painting, and is one of the best known images in the world. It is one of the pieces in a series titled The Frieze of Life. In the series Munch explored the themes of life, love, fear, death and melancholy. As with many of his works, he made several versions of the painting. One version was stolen from the Munch-museum in Oslo, Norway, on 22 August 2004, but on 31 August 2006 Norwegian police found it together with another picture that was stolen at the same time, Madonna.

Many people think that The Scream represents the universal anxiety of modern man.

The Frieze of Life themes come back throughout Munch's work. These themes can be seen in paintings such as The Sick Child (1886, portrait of his deceased sister Sophie), (1893–1894), Ashes (1894), and Four Girls on the Bridge (1905). The last-named shows limp figures. Those figures have faces with no features, or they have no faces at all. Threatening shapes of heavy trees and houses are above the figures. Munch portrayed women either as frail, innocent sufferers or as lurid, life-devouring vampires. 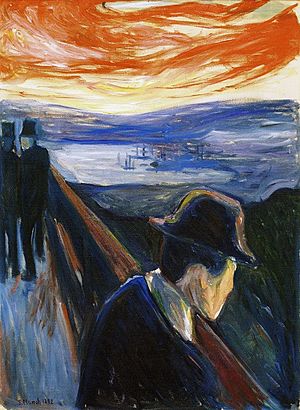 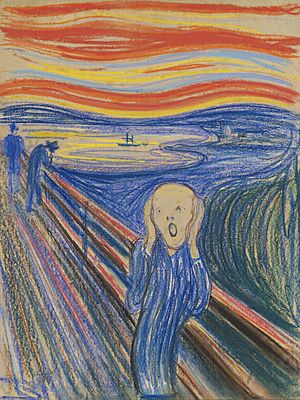 This is one of several versions of the painting The Scream. This version, executed in 1895 in pastel on cardboard, was sold on 2 May 2012 for nearly $120 million - the highest nominal price paid for a painting at auction at that time.

Edvard Munch was born on the 12th of December 1863. Munch, a Norwegian, had four brothers and sisters. He had followed his mother and sister by being the best artists in their family. While Munch was still young, his parents, a brother and Munch's favourite sister died. This probably explains the bleakness and pessimism of much of Munch's work.

It was when he was thirteen that he really came to like art. The first paintings Munch did were simple objects like medicine bottles and other objects. Later on, he drew oil paintings.

In 1885, Munch traveled to Paris. His work began to show the influence of French painters - first of the impressionists, and then of the postimpressionists and of art nouveau design.

In 1892, Munch took part in a controversial exhibit in Berlin. His circle of friends included several writers, one of whom was the Norwegian playwright Henrik Ibsen. Munch designed the sets for several of Ibsen's plays. Between 1892 and 1908, Munch spent much of his time in Paris and Berlin, where he became known for his etchings, his lithographs, and his woodcuts.

After 1910, Munch returned to Norway, where he lived and painted until his death. In his later paintings, Munch showed more interest in nature, and his work became more colorful and less pessimistic.

Munch was ill very often. Many scientists think that he suffered from bipolar disorder (manic depression).

Munch died in Ekely, near Oslo, on January 23rd, 1944. He left many of his works to the city of Oslo, which built the Munch Museum in his honor. This museum houses the broadest collection of his works. Some of his paintings are at The National Gallery, also in Oslo.

When Munch died, he bequeathed his remaining works to the city of Oslo, which built the Munch Museum at Tøyen (it opened in 1963). The museum hosts a collection of approximately 1,100 paintings, 4,500 drawings, and 18,000 prints, the broadest collection of his works in the world. The Munch Museum currently serves at Munch's official Estate and has been active in responding to copyright infringements, as well as clearing copyright for the work, such as the appearance of Munch's The Scream in a 2006 M&M advertisement campaign. The U.S. copyright representative for the Munch Museum and the Estate of Edvard Munch is the Artists Rights Society.

One version of The Scream was stolen from the National Gallery in 1994. In 2004 another version of The Scream along with one of Madonna were stolen from the Munch Museum in a daring daylight robbery. All were eventually recovered, but the paintings stolen in the 2004 robbery were extensively damaged. They have been meticulously restored and are on display again. Three Munch works were stolen from the Hotel Refsnes Gods in 2005; they were shortly recovered, although one of the works was damaged during the robbery.

In October 2006, the color woodcut Two people. The lonely (To mennesker. De ensomme) set a new record for his prints when it was sold at an auction in Oslo for 8.1 million NOK (1.27 million USD). It also set a record for the highest price paid in auction in Norway. On November 3, 2008, the painting Vampire set a new record for his paintings when it was sold for 38.162 million USD at Sotheby's New York.

Munch appears on the Norwegian 1,000 Kroner note along with pictures inspired by his artwork.

All content from Kiddle encyclopedia articles (including the article images and facts) can be freely used under Attribution-ShareAlike license, unless stated otherwise. Cite this article:
Edvard Munch Facts for Kids. Kiddle Encyclopedia.