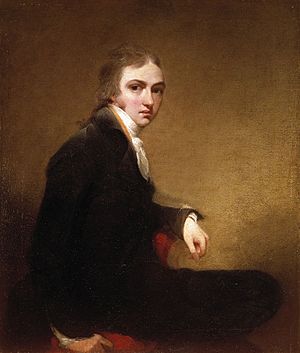 Thomas Lawrence (13 April 1769 – 7 January 1830) was an English portrait painter. He was born in Bristol. He was a child prodigy. His father was an innkeeper. When Lawrence was 10 years old he was supporting his family with his pastel portraits. He went to London when he was 18. He soon was well known as a portrait painter in oils. His first royal commission was a portrait of Queen Charlotte in 1790. He became an associate of the Royal Academy in 1791, a full member in 1794, and president in 1820. In 1810 he received the patronage of the Prince Regent. He died at age 60 in 1830. At his death, Lawrence was the most fashionable portrait painter in Europe. He is remembered today as the Romanticism portraitist of the British Regency.

All content from Kiddle encyclopedia articles (including the article images and facts) can be freely used under Attribution-ShareAlike license, unless stated otherwise. Cite this article:
Thomas Lawrence Facts for Kids. Kiddle Encyclopedia.