He lived in London all his life, retaining his Cockney accent and assiduously avoiding the trappings of success and fame. A child prodigy, Turner studied at the Royal Academy of Arts from 1789, enrolling when he was 14, and exhibited his first work there at 21. During this period, he also served as an architectural draftsman. He earned a steady income from commissions and sales, which due to his troubled, contrary nature, were often begrudgingly accepted. He opened his own gallery in 1804 and became professor of perspective at the Academy in 1807, where he lectured until 1828, although he was viewed as profoundly inarticulate. He traveled to Europe from 1802, typically returning with voluminous sketchbooks.

Intensely private, eccentric and reclusive, Turner was a controversial figure throughout his career. He became more pessimistic and morose as he got older, especially after the death of his father, after which his outlook deteriorated, and his gallery fell into disrepair and neglect, and his art intensified. He lived in near poverty circumstances and in poor health from 1845.

He left behind over 2,000 paintings and 19,000 drawings and sketches. He had been championed by the leading English art critic John Ruskin from 1840, and is today regarded as having elevated landscape painting to an eminence rivaling history painting. Widely considered one of the greatest masters of British watercolour landscape and marine painting, he is sometimes referred to as "the painter of light". A deeply experimental and progressive artist, his influence can be found in the works of painters as diverse as Claude Monet and Mark Rothko. 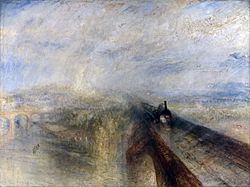 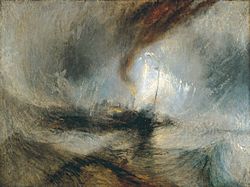 Snowstorm - steam boat off a harbor's mouth making signals in shallow water, and going by the lead, painted in 1842

Turner became a student at the Royal Academy of Art school in London when he was 14 years old. He was accepted into the Academy a year later. He had a watercolour painting in 1790 in the Academy's important art show. He had only been studying for a year. In 1802, at the age of only 28, he was elected a member of the Royal Academy, and later became its Professor of Perspective.

In 1802, Turner travelled around Europe, visiting France and Switzerland. He also went to the Louvre in Paris. During his life, he often travelled across Europe, visiting Venice in Italy several times. As his personal style developed, he began to produce paintings that were generalised or exaggerated in form and colour, rather than realistic or detailed. These caused much argument as to their artistic value, but nowadays are his best loved works. On his death, he left 300 oils and 20,000 watercolours to the British nation. Some of his watercolours are the most abstract or generalised of his paintings. 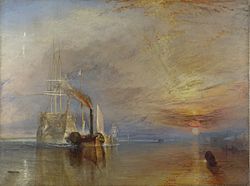 The Fighting Temeraire tugged to her last berth to be broken up, 1839

Turner became interested in natural catastrophes, and natural phenomena such as sunlight, storm, rain, and fog. He was fascinated by the violent power of the sea. His paintings revolve around the light of the sun, shown in infinite variety. His work showed some of the ideas of the impressionists decades before they arrived on the scene. Monet, in particular, studied Turner's methods.

His most famous paintings include The Fighting Temeraire tugged to her last berth to be broken up. Often called just The Fighting Temeraire, this is a picture of a famous warship that was used in the Battle of Trafalgar. Other pictures include Rain, Steam and Speed, which shows a steam train crossing a bridge, and Snowstorm which shows a steamship in a snowstorm trying to get into a harbour. In order to get the right feeling into this painting, he had himself tied to a ship's mast during a storm, so that he could see what it was like. Some of his most famous paintings show the roughness of nature, with bleak landscapes and violent storms.

But also there is beauty and a sense of calmness in pictures such as Crossing the Brook, a stunning scenic view of the Tamar Valley and River from New Bridge near Gunnislake in Cornwall, painted in 1815, a view which can still be admired today.

He died in Chelsea on 19 September 1851, and was buried next to the painter Joshua Reynolds in St Paul's Cathedral.

Even while Turner was alive, some people thought he was a genius. Some people complained that the pictures he painted when he was older were not realistic, and some even joked that they could have been painted with a mop. However, most think that his way of painting shows complete mastery.

All content from Kiddle encyclopedia articles (including the article images and facts) can be freely used under Attribution-ShareAlike license, unless stated otherwise. Cite this article:
J. M. W. Turner Facts for Kids. Kiddle Encyclopedia.