John Ruskin (8 February 1819 – 20 January 1900) was the leading English art critic of the Victorian era, as well as an art patron, draughtsman, watercolourist, a prominent social thinker and philanthropist. He wrote on subjects as varied as geology, architecture, myth, ornithology, literature, education, botany and political economy.

His writing styles and literary forms were equally varied. He penned essays and treatises, poetry and lectures, travel guides and manuals, letters and even a fairy tale. He also made detailed sketches and paintings of rocks, plants, birds, landscapes, and architectural structures and ornamentation.

The elaborate style that characterised his earliest writing on art gave way in time to plainer language designed to communicate his ideas more effectively. In all of his writing, he emphasised the connections between nature, art and society.

He was hugely influential in the latter half of the 19th century and up to the First World War. After a period of relative decline, his reputation has steadily improved since the 1960s with the publication of numerous academic studies of his work. Today, his ideas and concerns are widely recognised as having anticipated interest in environmentalism, sustainability and craft.

In 1869, Ruskin became the first Slade Professor of Fine Art at the University of Oxford, where he established the Ruskin School of Drawing. He founded the Guild of St George, an organisation that still exists. 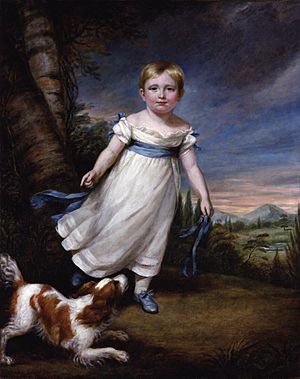 Ruskin as a young child, painted by James Northcote

Ruskin was born at 54 Hunter Street, Brunswick Square, London (demolished 1969), south of St Pancras railway station. His childhood was characterised by the contrasting influences of his father and mother, both fiercely ambitious for him. John James Ruskin helped to develop his son's Romanticism. They shared a passion for the works of Byron, Shakespeare and especially Walter Scott. Margaret Ruskin, taught young John to read the King James Bible from beginning to end, and then to start all over again, committing large portions to memory. Its language, imagery and stories had a profound and lasting effect on his writing.

He was educated at home by his parents and private tutors, and from 1834 to 1835 attended the school in Peckham run by the progressive Evangelical, Thomas Dale (1797–1870). Ruskin heard Dale lecture in 1836 at King's College, London, where Dale was the first Professor of English Literature. Ruskin went on to enroll and complete his studies at King's College, where he prepared for Oxford under Dale's tutelage. 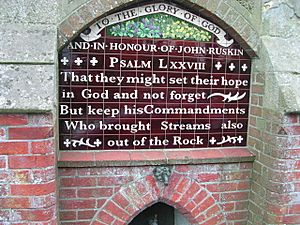 In August 1871, Ruskin purchased Brantwood, on the shores of Coniston Water, in the English Lake District, paying £1500. It remains open to visitors today. It was Ruskin's main home from 1872 until his death.

He died at Brantwood from influenza on 20 January 1900 at the age of 80. He was buried five days later in the churchyard at Coniston, according to his wishes.

The centenary of Ruskin's birth was keenly celebrated in 1919. Brantwood was bought in 1932 by the educationist and Ruskin enthusiast and collector, John Howard Whitehouse. In 1934, it was opened to the public as a permanent memorial to Ruskin.

Ruskin’s influence reached across the world. Tolstoy described him as "one of the most remarkable men not only of England and of our generation, but of all countries and times" and quoted extensively from him, rendering his words into Russian.

Proust not only admired Ruskin but helped translate his works into French. Gandhi wrote of the "magic spell" cast on him by his writing.

In Japan, Ryuzo Mikimoto actively collaborated in Ruskin's translation. He commissioned sculptures and sundry commemorative items, and incorporated Ruskinian rose motifs in the jewellery produced by his pearl empire. He established the Ruskin Society of Tokyo and his children built a dedicated library to house his Ruskin collection. 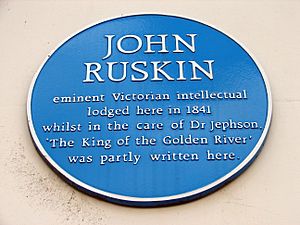 Ruskin's Drawing Collection, a collection of 1470 works of art which he gathered as learning aids for the Ruskin School of Drawing and Fine Art which he founded at Oxford, is still in the possession of the school, now the Ashmolean Museum. The Museum has promoted Ruskin's art teaching methods using the collection, using them as the basis for in-person and online drawing courses.

Admirers and scholars of Ruskin can visit the Ruskin Library at Lancaster University, also Ruskin's home, Brantwood, and the Ruskin Museum, both in Coniston in the English Lake District. All three mount regular exhibitions open to the public all the year round. Ruskin's Guild of St George continues his work today.

All content from Kiddle encyclopedia articles (including the article images and facts) can be freely used under Attribution-ShareAlike license, unless stated otherwise. Cite this article:
John Ruskin Facts for Kids. Kiddle Encyclopedia.