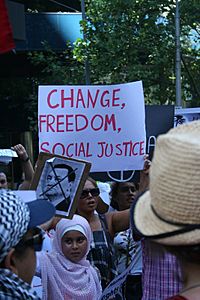 A protester holds a sign calling for "change, freedom, social justice" at a 2011 rally.

Social justice is an idea of justice that affirms social equality against any kind of discrimination or abuse out of social class, social status or any other reasons.

This idea is discussed by modern philosophers such as John Rawls. It is a fundamental idea for International Labour Organization for universal and lasting peace; And Vienna Declaration also affirm social justice as a subject and a purpose of education for human rights.

Social justice has been criticized by many people.

All content from Kiddle encyclopedia articles (including the article images and facts) can be freely used under Attribution-ShareAlike license, unless stated otherwise. Cite this article:
Social justice Facts for Kids. Kiddle Encyclopedia.