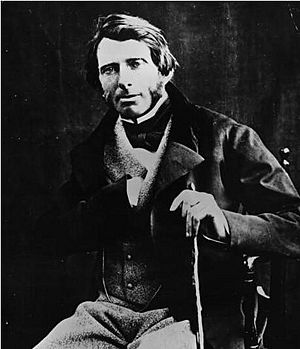 John Ruskin (1819-1900), c.1870. Leo Tolstoy described Ruskin as, "one of those rare men who think with their heart." A champion of the work of J.M.W. Turner, Ruskin hated the work of James McNeill Whistler

An art critic is a person who writes about art. He writes reviews which are published in newspapers, magazines, books and on web sites. He often goes to museums and art exhibitions and then writes about the paintings and sculptures on display.

Professional art critics should know a lot about art history.

People often discuss what the art critic has said or written. It may lead to a lot of discussion among art lovers. When art critics write good things about young artists it may help them to become famous. If they write bad things then it makes it difficult for young artists to have a good career. So, art critics (just like music critics with music) have a lot of influence on art culture. Critics such as Roger Fry have helped the public to understand the Post-Impressionist movement, and Lawrence Alloway helped to explain Pop Art.

All content from Kiddle encyclopedia articles (including the article images and facts) can be freely used under Attribution-ShareAlike license, unless stated otherwise. Cite this article:
Art critic Facts for Kids. Kiddle Encyclopedia.