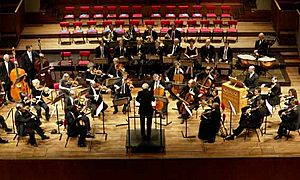 A music critic is someone who writes about concerts that have taken place or new music that has been written. They write reviews about this in newspapers or journals. What they write is called musical criticism.

When people write about the history of music or compare musical styles, this is called musicology. Musical criticism is about what is going on in the musical world at the moment.

Music critics can have a lot of influence on a musician’s success. If a musician gets a bad review people may not bother to go and hear him. If he has a very good review people will think he must be good and they will all want to hear him.

Occasionally it can happen that a new piece of music has such a terrible review that everyone wants to go and hear how terrible it is. They may then find that they like it and the music might become famous. This is called a “succès de scandale” (French for “scandalous success”). Stravinsky’s Rite of Spring (1913) is a good example.

Music critics will spend a lot of time listening to music. They often do other jobs with music such as teaching. Some famous music critics include:

• the German composer Robert Schumann. He published a music journal called Neue Zeitschrift für Musik. He wrote an article which has become famous called Neue Bahnen (New Paths) in which he said that there was a young man called Johannes Brahms who would become a great composer. Schumann was right.

• the French composer Hector Berlioz was a good music critic. He wrote a lot of music reviews in order to earn some money.

• The Austrian musicologist Eduard Hanslick. He became famous for saying that Johannes Brahms was a good composer and Wagner, Liszt and Bruckner were bad composers.

• the Irish playwright George Bernard Shaw. He wrote some interesting musical criticisms using the pseudonym (made-up name) Corno di Bassetto. There were some musicians he did not like and he said so. This made him quite a few enemies.

All content from Kiddle encyclopedia articles (including the article images and facts) can be freely used under Attribution-ShareAlike license, unless stated otherwise. Cite this article:
Music critic Facts for Kids. Kiddle Encyclopedia.