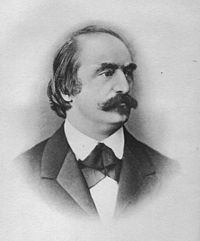 Eduard Hanslick (born Prague September 11, 1825; died Baden, Austria, August 6, 1904) was a famous music critic. He wrote about music that was being composed in his time. He liked the music of composers like Brahms and Schumann but hated the music of Wagner and Liszt. Their music sounded too modern for his taste.

He was born into a German-speaking family. His father was a music teacher. When he was 18 Hanslick went to study music with Tomášek, one of Prague's most important musicians. He also studied law at Prague University. He did not study music at university but he knew a lot about music and played the piano very well. He started writing music reviews (writing about concerts that had taken place). For many years he wrote reviews in a paper called Neue freie Presse. He became professor of history and music at the University of Vienna and was an adjudicator at lots of music festivals. His most famous book was called Vom Musikalisch-Schönen (About Beauty in Music).

Hanslick's tastes were conservative (he did not like new ideas). We remember him today for writing good things about Brahms and bad things about Wagner. A lot of musicians took sides on this matter. It is sometimes called: The War of the Romantics. Musicians had long arguments in the music journals about which kind of music was better.

Although in some ways he was narrow-minded he had a lot of influence on music. His books on music are very interesting showing great knowledge. He knew most of the great musicians of his day.

Wagner made a caricature of Hanslick in his opera Die Meistersinger von Nürnberg in which the town clerk Beckmesser criticizes the young singer Walther who sings songs which break the traditional rules of composition.

All content from Kiddle encyclopedia articles (including the article images and facts) can be freely used under Attribution-ShareAlike license, unless stated otherwise. Cite this article:
Eduard Hanslick Facts for Kids. Kiddle Encyclopedia.