Ruskin is an unincorporated census-designated place in Hillsborough County, Florida, United States. The area was part of the chiefdom of the Uzita (Florida) at the time of the Hernando de Soto expedition in 1539.

U.S. Route 41 currently runs through the center of Ruskin. The community was founded August 7, 1908 on the shores of the Little Manatee River. It was developed by Dr. George McAnelly Miller, an attorney and professor at Ruskin College in Trenton, Missouri, and Mrs. Adaline D. Miller. It is named after the essayist and social critic John Ruskin (1819–1900). Miller established the short-lived Ruskin College. To gain a sense of the Zeitgeist of the founding philosophy, note that in the old Ruskin City area there is a Carlyle Blvd named for Thomas Carlyle and there once was a Morris Park named for William Morris.

Ruskin remained largely agricultural, including large tomato crops, until recent decades when it expanded with suburban housing developments. The population was 17,208 at the 2010 census. The town is home to Cockroach Bay Aquatic Preserve.

Situated on the shores of the Little Manatee River, the town (founded on August 7, 1908) and college were named after the English writer and social reformist John Ruskin (1819–1900). Ruskin, a utopian, founded the guild of St George, a celebration of workmanship that underpinned the Arts and Crafts movement of William Morris. Ruskin was a passionate educator.

In 1907, Dr. George McAnelly Miller, a former Chicago prosecuting attorney and professor, and former president of Ruskin College in Trenton, Missouri, relocated his family to the area, and along with his brother-in-law Albert Peter Dickman’s family. They purchased land and started to set up homes, a saw mill, and a school. Mrs. Adaline D. Miller, (Dr. Miller's wife) founded a post office on August 7, 1908. This day is recognized as the official founding day of the town. The Ruskin Commongood Society platted Ruskin on February 19, 1910, and filed the plat on March 9, 1910, in the Hillsborough County Court House with lots for the college, the business district, two parks, and for the founding families, with only Whites allowed to own or lease land in the community. Albert Dickman’s house, finished in 1910, on the banks of the Little Manatee River, is one of the few structures left standing from the founding of Ruskin.

The Millers began Ruskin College in 1910 with Dr. Miller serving as president and Adeline Miller serving as Vice President. Continuing with the college’s former practices, students worked a portion of each day as part of their education and as a way to pay for tuition and board. It offered three years of preparatory classes, students could then attend the college, taking classes in art, drama, language, literature, music, shorthand, social sciences, and speech. In 1913 the school has 160 students.

By 1913, the community had a cooperative general store, a canning factory, a telephone system, an electric plant supplying electricity to both public and private buildings, a weekly paper, and regular boat freight and passenger service to Tampa.

With the onset of World War I, most students went to the war in Europe and the college closed its doors. In 1918, a fire destroyed the college, sparing only the Miller’s house. Dr. Miller died in August 1919.

At this time U.S. Route 41 was only a 9-foot-wide (2.7 m) shell road paid for by a $30,000 local bond issue. Because of the growing importance of truck farming, these roads and others were built to facilitate the transportation of produce to local markets throughout the 1920s. The railroad track connected Ruskin to the Seaboard Airline Railroad line in 1913. On the eve of the college’s demise in 1918, Ruskin had a population of 200 Ruskinites, as they are called. The majority of people appeared to have been truck growers. These residents supported a saw mill, a turpentine still, a syrup factory, a black smith, a newspaper, a lawyer, two carpenters, and three general stores. Rachel W. Billings served as postmaster and as the Universalist Reverend. With this foundation, it is not surprising that even with the destruction of the college the colony survived. 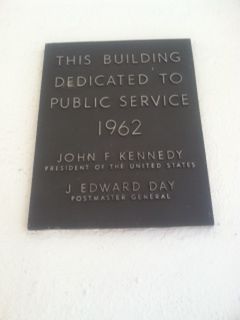 In 1925, Ruskin’s population remained at 200. It had six hotels, two saw mills, one turpentine still, a public library, the Ruskin Telephone Company, four groceries, one garage, a well driller, two restaurants, a dry goods dealer, a carpenter, and a number of fruit and truck growers. Some of the fields have been cultivated and tomatoes, cabbages, onions and other crops are being raised. There is a nursery established for ornamentals on a favorable site, and in all probability it will become a pretentious place. Thousands of palms are ready for the demand of the markets and streets are being graded in certain portions of the town that lie off the highway....The social life of the town is commendable. The women have organized four or five clubs, ranging from the Woman’s Twentieth Century Club of the League of Women Voters. A new school was erected, as well as a church. With the road developments auto service was provided to Brandon, Tampa, and Wimauma.

In 1930 Ruskin’s population reached 709, consisting of 395 males and 314 females. Despite the deed restrictions against African Americans owning or leasing property, 140 Blacks resided in Ruskin. The rest of the population was White, of whom 514 were native and 52 were foreign born. Three companies operated in Ruskin in 1935 despite the Depression and a drop to 600 residents: Florida Power & Light Company; Ruskin Telephone, Electric Light and Power Company, Inc.; and Ruskin Trailer Company.

Because of its agricultural roots, the town weathered the depression. The soil of Ruskin farms is especially adapted to growing tomatoes. There is a large area of muck land under-laid with marl in this region. The marl base allows irrigation of crops without loss of fertilizer, as the marl prevents the fertilizer from washing too deep into the soil. Irrigation is no problem for Ruskin is favored with numerous artesian wells. Due to the rapid growth of tomato culture and a cooperative arrangement among Ruskin farmers, the town has taken a new lease on life and again is a thriving community. It has a canning plant which employs 65 workers, a community hall and a modern schoolhouse. As part of an attempt to attract visitors to Ruskin and to celebrate the area’s agricultural richness, the community instituted the annual springtime Ruskin Tomato Festival in 1935 where vegetables were displayed and the community’s most popular woman was voted as queen. This Festival still takes place every year in May.

With many Ruskin residents working in Tampa during World War II, people from Tampa began hearing of the benefits of the rural community. Shortly after the war, Ruskin slowly became more and more suburban as people not related to the agricultural business moved into the community.

In 1960, Ruskin was still very rural. Agriculture dominated Ruskin throughout the 1970s, but its influence began to wane. The greater Ruskin area’s population reached 17,000 by 1975, many of whom were not farmers, but suburbanites. By 1982, Ruskin produced approximately 3,000 acres (1,200 ha) of tomatoes a year, and one of the world’s largest tomato-packing houses operated in nearby Apollo Beach. However, flower farms, phosphate, real estate, and tropical fish farms also became important economic engines for Ruskin that began encroaching upon farmland. Despite this invasion, farmers grew approximately $15 million worth of produce yearly in the late 1980s.

Poor crop yields in the mid- to late 1980s drove some farmers to the wall. Many borrowed money, sometimes as much as $500,000, against their land to plant their crops. Consequently, many farmers were forced out of business, and others chose to leave farming forever. Due to the impact of the North American Free Trade Agreement in the 1990s which allowed Mexican tomatoes to flood the U.S. market and with ever-increasing water restrictions, tomato acreage continued to decline. Less than half the number of acres planted with tomatoes in the early 1990s were planted in 1997. The housing boom of the first decade of the 21st century turned most of the tomato and orange plantations into new housing development, bringing thousand of new inhabitants to the area.

Despite the downfall of the housing market, Ruskin continues to grow. U.S. Route 41 is now a 4-lane road connecting Ruskin to Tampa, as does the interstate I-75 that has an exit at Ruskin. It had a very active Chamber of Commerce until 2011 when it merged with the Apollo Beach Chamber to become the South Shore Chamber of Commerce and moved from Ruskin to Apollo Beach. Ruskin is the seat of the South Hillsborough County Government Center. It also has a branch of the Hillsborough County Public Library System. In 2009, the Dickman family donated the land where the new Ruskin Campus of the Hillsborough Community College was erected, across the street from the Earl J. Lennard High School.

There were 2,963 households out of which 29.8% had children under the age of 18 living with them, 53.6% were married couples living together, 10.5% had a female householder with no husband present, and 30.0% were non-families. 23.9% of all households were made up of individuals and 11.6% had someone living alone who was 65 years of age or older. The average household size was 2.79 and the average family size was 3.28.

The annual BIG DRAW-Ruskin began in 2008 to mark the 100th anniversary of Ruskin as a community whose founders were influenced by the writings and philosophy of John Ruskin. It is inspired by and linked to the international Campaign for Drawing first initiated in Great Britain to honor John Ruskin. THE BIG DRAW-Ruskin celebrated the vision of Ruskin who believed in drawing as a tool for understanding and knowledge and promoted the importance of the arts in education and community life.

The 2008 Ruskin Community Mural was drawn by Artist Michael Parker & The Amazing Community Mural Team. Parker with assistant Dave Bush recruited a community group of Ruskin teens and adults. The intergenerational group engaged in an intense collaboration of research, photography, and discussion of possible ideas. The final design concept was based on John Ruskin’s social ideal that human happiness requires the mix of the head, heart and hand. Mural imagery includes references to historic Ruskin, the agricultural and environmentally sensitive setting across the bay from urban centers, development and movement to future possibility. Maynard Clark donated mural site. The 2009 Community Mural-in-the-Round Project was coordinated by Josette Urso and The mural was painted on the Mary & Martha House building. Both the 2008 and 2009 projects were commissioned by the SouthShore Arts Council and funded by grants from the John Crawford Fund of the Community Foundation of Greater Sun City Center, Florida.2009 - 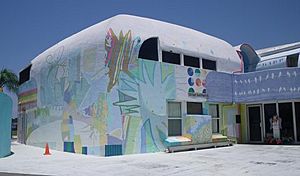 On October 30, 2014 Gannon University, which is based in Erie, Pennsylvania, announced that it would offer graduate health professional programs at a new campus in Ruskin. The site will be to meet increasing demand for high-quality graduate education in disciplines that serve the rapidly expanding health care sector of the Florida economy.

National Historic Status and other Points of Interest

There are several locations in and near Ruskin some of which have been included in the National Register of Historic Places.

All content from Kiddle encyclopedia articles (including the article images and facts) can be freely used under Attribution-ShareAlike license, unless stated otherwise. Cite this article:
Ruskin, Florida Facts for Kids. Kiddle Encyclopedia.