Brandon is a census-designated place (CDP) in Hillsborough County, Florida, United States. It is part of the Tampa–St. Petersburg–Clearwater Metropolitan Statistical Area. As of the 2010 census, the CDP had a total population of 103,483.

Its history began on January 20, 1857, when John Brandon (1809–1886) arrived at Fort Brooke (now Tampa) from Mississippi with his first wife Martha (1813–1867) and six sons. At first he moved his family to what is now the Seffner area. Then in August 1858, John Brandon, purchased 40 acres (160,000 m2) in the New Hope area (now Brandon) and 160 acres (0.65 km2) later on and then named his land Brandon. John and his second wife Victoria's house was located on what would become the corner of Knights and Victoria Street. Four years later, the New Hope Church was built on land donated by Brandon. Besides being the first church in the community, it also served as Brandon's first school.

In 1890, the Florida Central and Peninsula Railroad came through the area, encouraging the people of New Hope to build a depot on Moon Avenue. Charles S. Noble, a Florida Central and Peninsula Railroad engineer, was asked to plat approximately forty acres of land north of present day State Road 60, South of Lake Meade, east of Kings Avenue, and west to Parsons Avenue. Filed on April 24, 1890, the surveyor named the community in honor of John Brandon and Noble Street for himself.

Since then, Brandon has grown in spurts, beginning with the first general store opened by Dan Galvin on the corner of Moon Avenue and Victoria Street. In 1905, a school was built on Parsons Avenue and Victoria Brandon allowed new teachers to board with her so that the new school would have a teacher.

By 1914, the community needed a large central school to house all of the area's students, so the Brandon Grade School (now McLane Middle School) was built on Knights Avenue to house grades 1 through 12.

The first Brandon census was taken in 1922 when the population was 100. In 1925, Hopewell Road became a 9-foot (2.7 m) wide, paved road and residents such as Clarence Hampton began building business along it in 1927. Clarence opened the first gas and service station.

During the 1920s, the eastern border of Brandon was Pinewood Avenue. Beyond that, was the Kingsway Poultry Colony, where chickens were raised during the winter to be sold in Ybor City. During the Great Depression, the poultry farms closed, until around 1946, when Bill and Ann Hollash moved to Brandon and started Brandon Egg (which became Hollash Eggs), the largest egg producers in eastern Hillsborough County. Hollash Eggs closed in the late 1990s. The original farm, over 30 acres, was sold to what is now Bell Shoals Baptist Church.

Most local residents worked in the two orange packing houses in Valrico. The center of town remained at Moon Avenue and Victoria Street, where the train depot, post office, school, and grocery store were all located. For entertainment and everything else, the train to Tampa was the way to go, as only a few paved roads existed with most being dirt or shell topped, making the drive to Tampa very difficult.

World War II was an interesting time in Brandon, with little growth, but a definite edge as they had the food they raised on their farms. After the war, new businesses began to open again. A drug store and soda fountain at the corner of Parsons Avenue and Hopewell Road quickly became a popular teenage hangout. In 1950, Scogin's opened their famous variety store on Hopewell Road, and in 1953, Brandon got its first physician, Dr. V. R. Hunter.

The 1950s were the beginning of the real growth period for Brandon. Yates Elementary was built in 1954, followed by Mann Junior High School in 1957. Brandon Grade School, on Knights Avenue, became the first Brandon High School. At the time, there were fewer than 100 graduates a year. In 1956, Hopewell Road was connected to Adamo Drive, which made access to Tampa easier, thus turning Brandon into a bedroom community. With commuters, came subdivisions, the first of which was Hill-Dale Heights on Kingsway Avenue. The Brandon News was established in 1958 as a one-page newsletter and advertisement for Scogin's clothing store, written by Al & Chris Scogin. Brandon's first honorary Mayor's race was held in 1959 and was won by Nat Storms.

In 1959, the Brandon Chamber of Commerce was formed to help promote business and growth. By the early 1960s, Brandon's population was 8,000, and it was estimated that one new family moved into town every day. Brandon began spreading out into the bordering communities of Limona, Seffner, and Valrico; Hopewell Road became four lanes wide and was designated State Road 60. Soon, the town's first shopping center, Brandon Center, was built, and Brooker Elementary School and the Brandon Swim and Tennis Club both opened in 1965. In the next few years, Kingswood Elementary School, the Brandon Public Library, and many housing developments, shopping centers, and golf courses further fueled or reflected the influx of new residences and businesses.

By the 1970s, growth was causing traffic congestion, as approximately 430 commercial and service businesses, 3 malls and a population of 40,000 were all contained within a six-mile (10 km) radius.

In the mid-1970s, Hillsborough Community College moved to Brandon by holding classes at public schools. More indications of the increasing population were the building of Brandon Community Hospital and the Brandon Cultural Center (now the Center Place Fine Arts and Civic Association).

Brandon took off rapidly during the 1980s. Development of the southern area of Brandon brought thousands of new residents. On September 27, 1986, I-75 began to bring traffic through the Brandon area, dramatically changing the community and helping its population reach approximately 100,000 with over 2,500 businesses by 1988.

Brandon, like the Tampa Bay area, has a humid subtropical climate. Unlike Tampa and Pinellas County, Brandon will typically have a few nights below freezing each year due to its greater distance from the coast. The summers are long and hot, and average 85 degrees; winters are mild and dry, averaging 62 degrees. Brandon, like the rest of the Tampa Bay area, receives abundant rainfall, as it receives 44 inches (1,100 mm) of rain annually. Brandon's winters may have low temperatures in the 30s for more than four days while Tampa can have low temperatures in the 40s and 50s in that same period of time.

As of 2000, English spoken as a first language accounted for 85.24% of all residents, while 14.75% spoke other languages as their mother tongue. The most significant were Spanish speakers who made up 11.07% of the population, while German came up as the third most spoken language, which made up 0.57%, and Tagalog was at fourth, with 0.44% of the population. 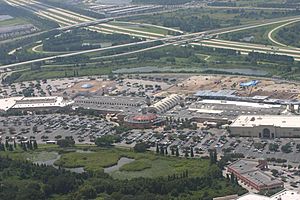 Known for being a bedroom community for Tampa, Brandon boasts many characteristic establishments that have lasted over a quarter of a century. Brandon is the birthplace of Beef O'Brady's, a family-oriented bar and grill chain restaurant with locations throughout the southeastern United States.

Pictures taken at the Hillsborough County Fair in 2012:

All content from Kiddle encyclopedia articles (including the article images and facts) can be freely used under Attribution-ShareAlike license, unless stated otherwise. Cite this article:
Brandon, Florida Facts for Kids. Kiddle Encyclopedia.