Plant City is an incorporated city in Hillsborough County, Florida, United States, approximately midway between Brandon and Lakeland along Interstate 4. The population was 34,721 at the 2010 census.

Despite many thinking it was named for flora grown at plant nurseries (especially vegetables and fruits, as well as tropical houseplants) in its tropical Gulf Coast climate, it was named after prominent railroad developer Henry B. Plant (see Plant System). Plant City is known as the winter strawberry capital of the world and hosts the annual Florida Strawberry Festival in the late winter (usually in February or early March), which is attended by people from all over the United States as well as many people from around the world.

Plant City's original name was Ichepucksassa (also known as Idasukshed) after the Indian village that once occupied the territory. Its name caused so much confusion that the city was renamed Cork, after the postmaster's Irish hometown. It was finally given the name Plant City in commemoration of Henry B. Plant and his railroad, which significantly boosted the commerce in this primarily agricultural community by incorporating it with the South Florida Railroad.

The columnist John Keasler, who wrote 7,000 columns over 30 years for The Miami News, hailed from Plant City.

Plant City was the spring training home of baseball's Cincinnati Reds, who played exhibition games at Plant City Stadium from 1988 to 1997.

The city and its surrounding area are in the Southern Flatwoods ecological community as defined by the US Department of Agriculture. [1] The region as a whole is noted for its sandy, infertile, and poorly drained soils. In and around Plant City, however, high organic matter content and scattered phosphate nodules make many of the soils more fertile than typical for the flatwoods.

Plant City, as does most of Florida, has a humid subtropical climate with humid and hot summers and warm, drier winters. Since the coolest month mean temperature is 61 °F, it narrowly misses the definition of a true tropical climate. 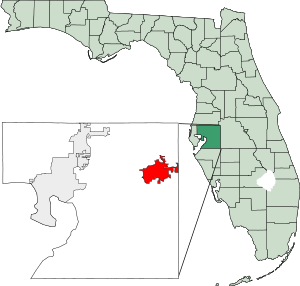 Plant City Union Depot served both the Atlantic Coast Line Railroad (ACL) and Seaboard Air Line Railroad even after their merger into the Seaboard Coast Line Railroad until passenger service ceased operations in 1971. It has been on the National Register of Historic Places since 1975. The east-west ACL tracks cross the north-south Seaboard tracks at a 90-degree angle at the southeast corner of the station, forming a diamond junction. Both tracks are now owned and run by Class 1 railroad CSX. Amtrak's Silver Star uses the line's west-to-eastbound ACL tracks, although it does not stop at the station.

At the station, a train observation deck is present where one can watch CSX freight trains and Amtrak's Silver Star train pass, as well as the Tropicana Juice Train. The closest other passenger stations are Tampa or Lakeland.

There are several locations in Plant City which have been included in the National Register of Historic Places. They are:

On October 12, 2009, the Plant City Commissioners voted 4-1 to essentially ban all new murals in the Historic District of Plant City. Current murals being painted are not affected by this ban, but no new murals can be painted unless the owner of the building can prove there was an already existing mural on the wall before 1994. The ban was set in motion by a complaint about a recent mural by Blake Emory- a rendition of Norman Rockwell's "April Fools" - contained a sex organ in the painting. Even though the creators of the mural insisted it was not intentional, and immediately altered the section of the mural, City Commissioners hastily cast the vote adding that they may revisit this ban in the future. City Commissioner Bill Dodson was the only vote against the ban saying he was looking for a more thought out and complete ordinance over an immediate and outright ban.

Wish Farms, the largest strawberry producer in Florida, has a large presence in Plant City.

All content from Kiddle encyclopedia articles (including the article images and facts) can be freely used under Attribution-ShareAlike license, unless stated otherwise. Cite this article:
Plant City, Florida Facts for Kids. Kiddle Encyclopedia.