Lakeland is a city in Polk County, Florida, United States, east of Tampa. According to the 2013 U.S. Census Bureau estimate, the city had a population of 100,710. Lakeland is a principal city of the Lakeland–Winter Haven Metropolitan Statistical Area (coterminous with Polk County), which had an estimated population of 623,009 in July 2013 based on data from the University of Florida Bureau of Economic and Business Research. It is twinned with Richmond Hill, Ontario; Imabari, Ehime, Japan; Balti, Moldova; Portmore, Jamaica; and Chongming County, Shanghai, China as part of the Sister Cities program.

The area was home to Native American tribes. Lakeland was settled in the 1870s and expanded in the 1880s with the arrival of rail service. Lakeland is home to the 1,267-acre Circle B Bar Reserve.

The first Paleo-Indians reached the central Florida area near the end of the last ice age, as they followed big game south. As the ice melted and sea levels rose, these Native Americans ended up staying and thrived on the peninsula for thousands of years. By the time the first Spanish conquistadors arrived, over 250,000 Native Americans were living on the peninsula. Some of these first early tribes were the Tocobago, Timucua, and Calusa. In 1527, a Spanish map showed a settlement near the Rio de la Paz. The arrival of the Spanish turned out to be disastrous to these Native American tribes. Within 150 years, the majority of the pre-Columbian Native American peoples of Florida had been wiped out. Those who had not succumbed to diseases such as smallpox or yellow fever were either killed or enslaved. Little is left of these first Native Americans cultures in Polk County except for scant archaeological records, including a few personal artifacts and shell mounds. Eventually, the remnants of these tribes merged with Creek Indians who arrived from the north and become the Seminole Indian tribe. 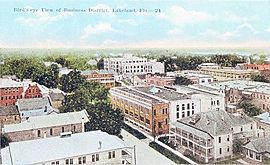 Florida became a state in 1845, and Polk County was established in 1861. After the American Civil War, the county seat was established southeast of Lakeland in Bartow. While most of the early history of Polk County centered on the two cities of Bartow and Fort Meade, eventually, people entered the areas in northern Polk County and began settling in the areas which became Lakeland.

Lakeland was first settled in the 1870s and began to develop as the rail lines reached the area in 1884. It was incorporated January 1, 1885. The town was founded by Abraham Munn (a resident of Louisville, Kentucky), who purchased 80 acres (320,000 m2) of land in what is now downtown Lakeland in 1882 and platted the land for the town in 1884. Lakeland was named for the many lakes near the town site.

In April 1898, the Spanish–American War began and started a crucial point in Lakeland's development. While the war ended quickly and had little impact on most of the nation, the Florida peninsula was used as a launch point for the war and the then small town of Lakeland housed over 9,000 troops.

The Florida boom resulted in the construction of many significant structures in Lakeland, a number of which are today listed on the National Register of Historic Places. This list includes the Terrace Hotel, New Florida Hotel (Regency Tower, currently Lake Mirror Tower), Polk Theatre, Frances Langford Promenade, Polk Museum of Art (not a product of the 1920s boom), Park Trammell Building (formerly the Lakeland Public Library and today the Lakeland Chamber of Commerce), and others. The city also has several historic districts with many large buildings built during the 1920s and 1940s. The Cleveland Indians held spring training there from 1923 to 1927 at Henley Field Ball Park. Parks were developed surrounding Lake Mirror including Barnett Children's Park, Hollis Gardens, and the newest, Allen Kryger Park.

The "boom" period went "bust" quickly, and years passed before the city recovered. Part of the re-emergence was due to the arrival of the Detroit Tigers in 1934 for spring training. (The team continues to train at Lakeland's Joker Marchant Stadium and owns the city's Florida State League team, the Lakeland Flying Tigers.) The development of the Lakeland Municipal Airport as a major facility in central Florida transportation was another factor. The 1930s also featured the arrival of renowned architect Frank Lloyd Wright. In 1938, he came to Lakeland at the request of Florida Southern College President Ludd Spivey to design a "great education temple in Florida." For 20 years, Wright worked on his "true American campus" creation. In his original master plan, he called for 18 buildings (and several other structures), nine of which were completed and nine left on the drawing board. All of the buildings were built out of what Wright called his "textile block system", the first use of such a system in Florida. He called his project "A Child of the Sun", so named from the architect's own description of being "out of the ground, into the light, a child of the sun." It is the largest one-site collection of Frank Lloyd Wright buildings in the world, and in many ways helped to form a pattern for many colleges in Florida and other areas of the country in the future years. 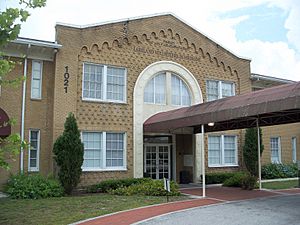 The John F. Cox Grammar School opened in 1925, now repurposed as the clinic for Lakeland Volunteers in Medicine

From World War II to present

During World War II, hundreds of young British airmen were taught to fly at Lakeland's Lodwick Airfield by volunteer flight instructors, a collection of barnstormers, and independent pilots. Later, when America entered the war, the Army Air Corps relied on training fields like Lodwick to train pilots for its fighters, bombers, and transport planes. 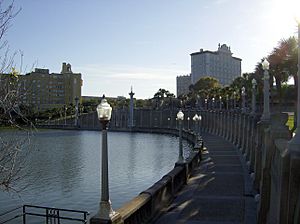 The dominant feature in Lakeland is the city's many lakes. Thirty-eight lakes are named, with a number of other bodies of water unnamed, mostly phosphate mine pits that eventually filled with water. The largest of these is Lake Parker, which is 2,550 acres (10.3 km2) in size. Much of the culture of Lakeland revolves around its many lakes, and many people use the lakes as reference points in much the same way that people in other towns use streets as reference points, such as "I live near Lake Beulah." In addition to Lake Parker, some of the more prominent lakes in the Lakeland area are Lake Hollingsworth, Lake Morton, Lake Mirror, and Lake Gibson.

Swans are one of the most visible features on the lakes of Lakeland. They have a long history, the first swans appearing around 1923. By 1954, the swans were gone, eradicated by alligators and pets. A Lakeland resident who mourned the passing of the swans wrote to Queen Elizabeth. The royal family allowed the capture of two of the royal swans, and the swans now on the lakes of Lakeland are the descendants of the royal swans sent by the queen.

In July 2006, Scott Lake, one of the city's lakes, was almost totally drained by a cluster of sinkholes. The lake later partially refilled .

Lakeland, like most other parts of Florida north of Lake Okeechobee, is located in the humid subtropical zone (Köppen climate classification: Cfa). Typically, summers are hot and humid with high temperatures seldom dropping below 90 °F and 70 °F for the overnight low. Like most of Central Florida, afternoon thunderstorms are the norm throughout the summer. Winters in Lakeland are drier and mild, with frequent sunny skies. High temperatures range in the low 70s during the day, with lows in the 50s. Rare cold snaps drop temperatures below freezing every few years.

As of 2000, those who spoke only English at home accounted for 91% of all residents, while 9% spoke other languages at home. The most significant were Spanish speakers who made up 6.44% of the population, while German came up as the third-most spoken language, which made up 0.75%, and French was fourth, with 0.51% of the population.

In 1913, the Wolfson family arrived from Lithuania and became the first Jewish settlers to the area. After some struggles, the Jewish community in Lakeland flourished and the first synagogue, Temple Emanuel opened in 1932. The Rohr Jewish Learning Institute presents classes and seminars in Lakewood in partnership with Chabad of Lakeland.

Lakeland is home to one of the first Hindu temples in the United States, the Swaminarayan Hindu Temple.

In 1994, the first and only mosque was established. It was called Masjid Aisha, but is now called the Islamic Center of Lakeland. It was remodeled in 2011. It is located on the corner of Providence and Orange Blossom.

Christianity makes up the largest religious group in Lakeland. As of 2013, an estimated 300 churches existed with an address in the city. 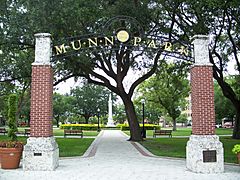 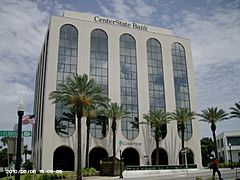 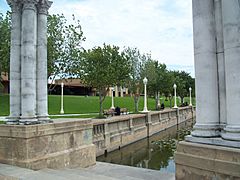 Lakeland and Polk County are within its own radio market. Local radio stations include:

The local newspaper is The Ledger, owned by Halifax Media Group.

The city magazine is "The Lakelander" published by Patterson Publishing 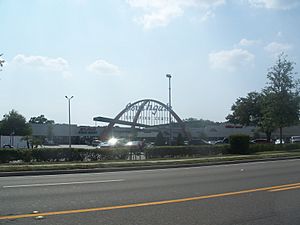 In 1990, Lakeland made its Hollywood debut when the Southgate Shopping Center was featured in the movie Edward Scissorhands. It was also used in the filming of the Judd Nelson movie Endure. Classrooms from Florida Southern College were used in the Adam Sandler comedy, The Waterboy.

Because Lakeland is the largest city on Interstate 4 between Tampa and Orlando, the city is an important transportation hub. The county nickname, Imperial Polk County, was coined because a large bond issue in 1914 enabled wide roads between the cities of Polk County.

The important freeways and highways in Lakeland today are: 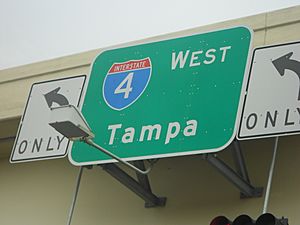 The Interstate 4 overpass in Lakeland (exit 32)

All content from Kiddle encyclopedia articles (including the article images and facts) can be freely used under Attribution-ShareAlike license, unless stated otherwise. Cite this article:
Lakeland, Florida Facts for Kids. Kiddle Encyclopedia.