Ray Anthony Lewis, Jr. (born May 15, 1975) is a former American football player. He played linebacker in the National Football League (NFL). He played his entire career for the Baltimore Ravens from 1996 to 2013. He played for the University of Miami in college. Lewis was drafted by the Baltimore Ravens with the 26th pick in the first round of the 1996 NFL Draft. Lewis was the MVP of Super Bowl XXXV making 11 tackles, 6 assists, and blocked 4 passes. He was the first linebacker to win the Super Bowl MVP award on the winning team.

Lewis grew up in Florida.

Lewis played for the Miami Hurricanes in college as a middle linebacker. Even though critics often said he was too small, Lewis became known for his intimidating style of play. He wore #52 on his jersey.

Lewis was drafted 26th oveall in the 1st Round of the 1996 NFL Draft by the Baltimore Ravens. Four years later, Lewis was a Super Bowl MVP when Baltimore defeated the New York Giants in Super Bowl XXXV. In that Super Bowl-winning 2000 NFL season, Lewis was part of a famous linebacker group that also had outside linebackers Jamie Sharper and Peter Boulware. Lewis was elected as the NFL Defensive player of the Year in 2000, and won it again in 2003.

Lewis playing against the Cincinnati Bengals at M&T Bank Stadium.

Throughout his career, Lewis has built a reputation as one of the best players in NFL history. In 2011, Lewis ranked #8 on the NFL's list of top 100 players. In his 16-year career, Lewis registered 1,993 tackles (1,514 solo), 40.5 sacks, intercepted 31 quarterback passes (returned for a total of 503 yards), and three touchdowns (including postseason).

On January 2, 2013, Lewis said that he intends retire from professional football after the 2012–13 NFL playoffs. 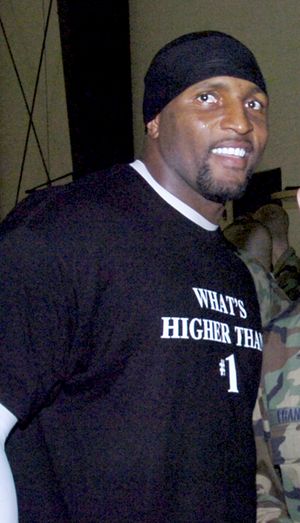 Lewis is a self-proclaimed Christian. He lives in Maryland, USA. In 2001, Lewis started the Ray Lewis Foundation, which helps struggling young people. Lewis is respected by Baltimore. He even has a street named after him, "#52 Avenue."

All content from Kiddle encyclopedia articles (including the article images and facts) can be freely used under Attribution-ShareAlike license, unless stated otherwise. Cite this article:
Ray Lewis Facts for Kids. Kiddle Encyclopedia.