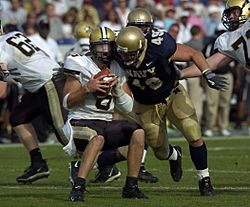 A quarterback sack is a move in American football. A defender rushes past the line of scrimmage and tackles the quarterback for a loss of yardage. In the National Football League, New York Giants defensive end Michael Strahan made 22.5 sacks in the 2002 season alone, which remains a record.

All content from Kiddle encyclopedia articles (including the article images and facts) can be freely used under Attribution-ShareAlike license, unless stated otherwise. Cite this article:
Quarterback sack Facts for Kids. Kiddle Encyclopedia.