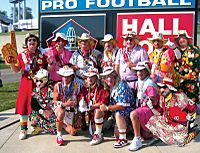 The Pro Football Hall of Fame is the hall of fame of the National Football League (NFL). It opened in Canton, Ohio, United States, on September 7 1963 with 17 original inductees. Through 2008, all but one of the Hall of Fame members have played some part of their professional career in the NFL (the only player who did not is Buffalo Bills guard Billy Shaw, who played his whole career in the American Football League (AFL) before the 1970 AFL-NFL merger). The Chicago Bears have the most Hall of Famers in the league at 26.

All content from Kiddle encyclopedia articles (including the article images and facts) can be freely used under Attribution-ShareAlike license, unless stated otherwise. Cite this article:
Pro Football Hall of Fame Facts for Kids. Kiddle Encyclopedia.