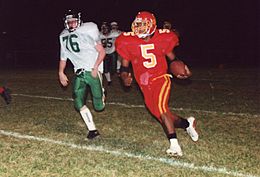 A running back sweeps the left end during a high school football game near Cincinnati, Ohio, 1999

High school football began in the late 19th century, concurrent with the start of many college football programs. In the late 19th and early 20th century, many college and high school teams played against one another. Other traditions of high school football such as pep rallies, marching bands, mascots, and homecomings are mirrored from college football. No true minor league farm organizations exist in American football. Therefore, high school football is generally considered to be the third tier of American football in the United States, behind professional and college competition. It is the first level of play in which a player will accumulate statistics, which will determine his chances of competing at the college level, and ultimately the professional level if he is talented enough.

All content from Kiddle encyclopedia articles (including the article images and facts) can be freely used under Attribution-ShareAlike license, unless stated otherwise. Cite this article:
High school football Facts for Kids. Kiddle Encyclopedia.