Polk County is located in the central portion of the U.S. state of Florida. The county population was 602,095, as of the 2010 census. Its county seat is Bartow, and its largest city is Lakeland.

The center of population of Florida is located in Polk County, near the city of Lake Wales.

Polk County is home to one public university, one state college, and four private universities. One Fortune 500 company, Publix Super Markets, has headquarters in the county. 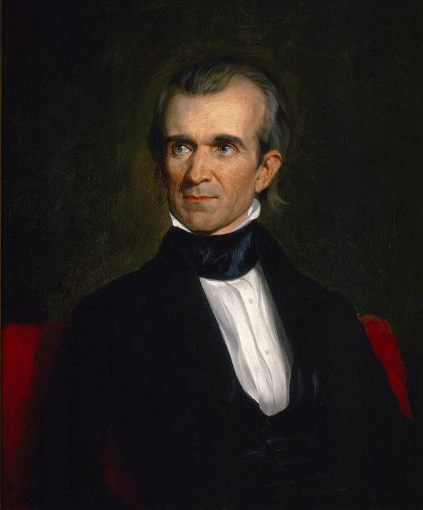 The first people to call Polk County home arrived close to 12,000 years ago during the last ice age as the first paleo-indians following big game southward arrived on the peninsula of Florida. By this time, the peninsula had gone through several expansions and contractions due to changing sea level; at times the peninsula was much wider than it is today, while at other times it was almost entirely submerged with only a few small islands exposed. These first paleo-indians, nomadic hunter/gatherers who did not establish any permanent settlements, eventually gave way to the "archaic people", the ancestors of the Indians who came in contact with the Spaniards when they arrived on the peninsula. These Indians thrived on the peninsula and it is estimated that there were over 250,000 in 1492 when Columbus set sail for the New World. As was common elsewhere, contact with Europeans had a devastating effect on the Indians. Smallpox, measles, and other diseases, to which the Indians had no immunity, caused widespread epidemic and death. Those who had not succumbed to diseases such as these were often either killed or enslaved as Spanish explorers and settlers arrived. Within a few hundred years, nearly the entire pre-columbian population of Polk County had been wiped out. The remnants of these Indians joined with refugee Creek Indians from Georgia and The Carolinas to form the Seminole Indian Tribe.

For around 250 years after Ponce De Leon arrived on the peninsula, the Spanish ruled Florida. In the late 17th century, Florida went through an unstable period in which the French and British ruled the peninsula. After the American Revolution, the peninsula briefly reverted to Spanish rule. In 1819, Florida became a U.S. territory as a result of the Adams-Onis Treaty.

While Florida gained statehood in 1845, it was not until 1861 that Polk County was created from the eastern half of Hillsborough County. It was named in honor of former United States President James K. Polk, whose 1845 inauguration was on the day after Florida became a state.

Following the Civil War, the county commission established the county seat on 120 acres (0.49 km2) donated in the central part of the county. Bartow, the county seat, was named after Francis S. Bartow, a confederate Colonel from Georgia who was the first confederate Brigade Commander to die in battle. Colonel Bartow was buried in Savannah, Georgia with military honors, and promoted posthumously to the rank of Brigadier General. The original name of the town was Fort Blount. Several other towns and counties in the South changed their name to Bartow. The first courthouse built in Bartow was constructed in 1867. It was replaced twice, in 1884 and in 1908. As the third courthouse to stand on the site, the present structure houses the Polk County Historical Museum and Genealogical Library.

Growth in Polk County is driven by proximity to both the Tampa and Orlando metropolitan areas along the Interstate 4 corridor. Recent growth has been heaviest in Lakeland (closest to Tampa) and the Northeast areas near Haines City (nearest to Orlando). From 1990–2000, unincorporated areas grew 25%, while incorporated areas grew only 11%. In addition to developing cottage communities for commuters, there is evidence in Haines City of suburban sprawl into unincorporated areas. Despite the impressive growth rate, the unemployment rate of Polk has typically been higher than that of the entire state. In August 2010, the county had an unemployment rate of 13.4% compared to 11.7% for the entire state.

During the 2004 Atlantic hurricane season, three hurricanes, Charley, Frances and Jeanne all tracked over Polk County, intersecting in a triangle that includes the city of Bartow.

In 2010, the largest ancestry groups were:

The Polk County Library Cooperative was formed October 1, 1997 through an Interlocal Agreement between the 13 municipalities with public libraries and the Board of County Commissioners. The Cooperative enables the city-owned and operated public libraries to open their doors to all residents of the county, including those in the unincorporated area.

Interlibrary Loan (ILL) offers library patrons the opportunity to request and receive books that are not owned by the Winter Haven Public Library. Through ILL, not only do patrons have access to the circulating book collections of all the library systems in Polk County but also all of the library systems in Florida, as well as universities and public library systems throughout the United States.

The Polk County Historical & Genealogical Library was first established in 1937. It opened to the public in January 1940. The library was first located in the office of the County Attorney and was housed in a metal bookcase. Since then the library has been housed in several different locations within the old Polk County Courthouse. In 1968 the library hired its first full-time employee. By 1974 the library added a second employee and was moved to a new location on Hendry Street. In 1987 the library relocated once again, back to the 1908 Courthouse. The library then went under a ten-year renovation process, which led to an expansion that included all three floors of the eastern wing of the Courthouse. As of 2013, the library is located in the east wing of the Historical Courthouse in Bartow. It is governed by the Polk County Board of County Commissioners (BoCC) and administered by the Neighborhood Services Department and the Leisure of Services Division. The library holds one of the largest Genealogical and Historical collections in the Southeast United States.

The Polk County Historical & Genealogical Library currently holds over 40,000 items in the collection. The collection includes books, microfilm, and periodicals that include information about the history and genealogy of the entire eastern United States. The selection of materials related to the history of Polk County contains local newspapers dated back to 1881, aerial photography to 1938, city directories to 1925 and property tax rolls to 1882. There are four full-time staff members available for assistance at the library. The library also offers local obituary searches and basic looks ups using email. 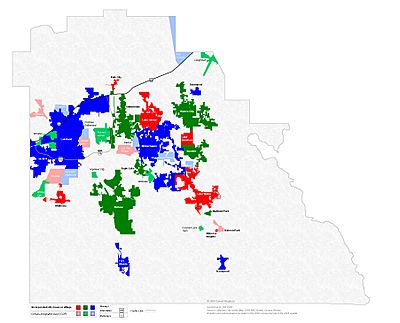 The top employers of Polk County are as follows:

Polk County is home to professional baseball and basketball teams and boasts a rich history of collegiate sports competition at a number of its institutions of higher learning, including perennial NCAA Division II National Championship contender and titleholder (in multiple sports), Florida Southern College.

Professional basketball made its debut in 2017 when The Lakeland Magic took the court in its home venue, RP Funding Center. The team is the NBA G League developmental affiliate of the NBA's Orlando Magic.

All content from Kiddle encyclopedia articles (including the article images and facts) can be freely used under Attribution-ShareAlike license, unless stated otherwise. Cite this article:
Polk County, Florida Facts for Kids. Kiddle Encyclopedia.