Kids Encyclopedia Facts
This page is about the botanical garden in Florida. For the Tulsa skyscraper (formerly One Williams Center), see BOK Tower. 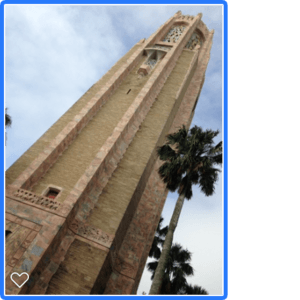 Bok Tower Gardens (also known as Bok Mountain Lake Sanctuary and Singing Tower) is a contemplative garden, and bird sanctuary located north of Lake Wales, Florida, United States. It consists of a 250-acre (100 ha) garden, the 205-foot (62 m) tall Singing Tower with its carillon bells, Pine Ridge Trail, Pinewood Estate, and a visitor center. The tower is built upon Iron Mountain, one of the highest points of peninsular Florida, estimated to be 295 feet (90 m) above sea level. It is a National Historic Landmark that is listed on the National Register of Historic Places, nationally significant for its association with Edward W. Bok and its designers.

Bok Tower Gardens is open daily and an admission fee is charged.

The gardens began in 1921 when a Dutch immigrant, Edward W. Bok, editor of the popular women's magazine Ladies Home Journal and his wife, Mary Louise Curtis Bok, who would found the Curtis Institute of Music in Philadelphia in 1924, were spending the winter beside Florida's Lake Wales Ridge and decided to create a bird sanctuary on its highest hill, 295 feet (90 meters) above sea level.

Bok commissioned noted landscape architect Frederick Law Olmsted Jr. to transform what then was an arid sandhill into "a spot of beauty second to none in the country". The first year was spent digging trenches and laying pipes for irrigation, after which soil was brought to the site by thousands of truck loads and plantings began. The Olmsted plan included the planting of 1,000 large live oaks, 10,000 azaleas, 100 sabal palms, 300 magnolias, and 500 gordonias, as well as hundreds of fruit shrubs such as blueberry and holly. 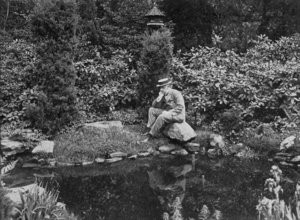 Where Edward Bok is Happiest: In His Garden

Attempts were made to introduce flamingos to the sanctuary several times, which is why early renderings of the tower show flamingos at the reflection pool rather than swans. These early efforts were unsuccessful, however, as the flamingos were not native to central Florida and could not survive the winters that were cooler than those of southern Florida, where they may be found.

Under construction for over five years, Bok Tower Gardens was dedicated by President Calvin Coolidge on February 1, 1929. Edward Bok died on January 9, 1930 and was interred at the base of the tower. 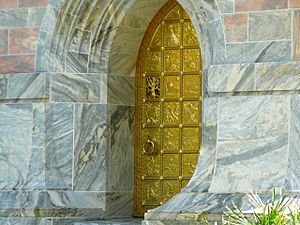 The Singing Tower is the centerpiece of the gardens. The tower was built at the highest elevation of the site, south of a reflection pool that allows the water to reflect its full image. A 60-bell carillon (cast by Taylor) set within the 205-foot (62 m) tall, Gothic Revival and Art Deco tower that was designed by architect Milton B. Medary. Construction on the tower began in 1927 and was completed for the dedication of the gardens in 1929, when it was dedicated by President Calvin Coolidge. The tower is 51 feet (16 m) square at its base, changing form at 150 feet (46 m) high to an octagon with 37 feet (11 m) sides that include sculptures designed by Lee Lawrie. The tower is surrounded by a 15-foot (4.6 m) moat that serves as a koi pond. It is built of pink Etowah marble and gray Creole marble, mined in Tate, Georgia, and coquina stone from St. Augustine, Florida.

Although the tower's interior is not open to the public, it contains the Anton Brees Carillon Library, said to be the largest carillon library in the world. It also is home to the Chao Research Center Archives, which keeps various institutional records related to Bok Tower.

Inside the bell chamber is a playing room that houses a clavier, or keyboard, that is used for playing the carillon bells. Recitals are given daily from the 60-bell carillon set.

Bok Tower Gardens currently houses a substantial amount of collections that document the history and growth of the Singing tower, the Gardens, and Pinewood Estate. While many of the collections are closed to the public for viewing, some selections from the archives about the history of the Gardens, Singing Tower, and Edward Bok are on display in the Visitor Center.

The Anton Brees Carillon Library includes over 1500 books, 200 collections of scores for keyboard instruments, 3000 scores and musical compositions for carillon, 1600 audio and video recordings, and 15 international professional journals that include more than 900 individual volumes. The library also houses vertical files on international carillons that include newspaper clippings, biographical information and concert programs along with the original blueprints and plans for the Singing Tower and Gardens and thousands of photographs and slides. There are several important collections located in the Anton Brees Carillon Library, including the Guild of Carillonneurs in North America Archives, Ronald Barnes Collection, Anton Brees Collection, Sidney Giles Collection and Arthur Bigelow Collection.

Access to the collections in the Anton Brees Carillon Library is available by appointment only. To make an appointment, the Bok Tower librarian should be contacted.

The Chao Research Center Archives was formed in 2008, after a generous donation made by the Ting Tsung and Wei Fong Chao Foundation. With this donation, space was made available on the second floor of the Singing Tower to accommodate a growing need for delicate archival documents. The Chao Research Center Archives stores the official archives of Bok Tower Gardens along with other significant collections. These significant collections include the Nellie Lee Bok Collection, American Foundation Collection, and Edward Bok Newspaper Scrapbook Collection.

Access to the collections in the Chao Research Center Archives is available by appointment only. To make an appointment the Bok Tower Librarian should be contacted.

The Pine Ridge Nature Preserve and Trail is an ecosystem typified by an over-story of Longleaf Pine, sandhill habitats, and a dense ground cover of perennial grasses that includes a nature trail that begins at the Window by the Pond and extends for three-quarters of a mile ending at the Visitor Center. The trail is located on one of the highest points in peninsular Florida at 298 feet above sea level. Long ago the Ridge was a chain of islands. The plants and animals found on the Ridge are unique because they evolved on the chain of islands, which is why the most rare plants and animals can be found in this area. The Pine Ridge is home to several endangered animals including the gopher tortoise, eastern indigo snake, gopher frogs, and the Florida mouse. Conservation efforts for the pine trail by Bok Tower include restoration of native plants, the regulation of invasive species and educating the public.

8 acres (32,000 m2) of the Gardens include the Pinewood Estate, which features a twenty-room Mediterranean Revival mansion. This mansion was built between 1930-1932 by C. Austin Buck, vice-president of Bethlehem Steel Co. in Pennsylvania, as a winter residence. Its original name was "El Retiro", and it has been restored to its 1930s appearance. The sanctuary features several events at this mansion during the year. Guided tours of the 20-room Mediterranean-style mansion are given daily.

Historical perspective on the life of Edward W. Bok and the story of the creation of the garden.

All of the Education Department's programs and field trips align with the Florida Sunshine State Standards and Polk County Curriculum Maps. The lessons presented in the Education Department's curriculum guide cover academic areas such as science, nature, visual & performance arts, culture and history. The curriculum guide was created to help students explore and discover Bok Tower Gardens before, during and after their trip. Students are able to learn detailed information about the gardens, the singing tower, Pinewood Estate and the Visitor Center that is contained within the curriculum guide.

Throughout the year, there are numerous events designed to draw visitors to the Gardens. These events include concerts featuring jazz, orchestras, and the carillon bells of the Tower. The most popular are the semi-annual symphony concerts, given in the evening once in the fall and once in the spring. These events draw thousands of visitors to the large field in front of the Tower for an outdoor picnic. They feature music from both the symphony orchestra and carillon bells.

All content from Kiddle encyclopedia articles (including the article images and facts) can be freely used under Attribution-ShareAlike license, unless stated otherwise. Cite this article:
Bok Tower Gardens Facts for Kids. Kiddle Encyclopedia.