Holly is a type of bush with recognisable leaves. The leaves have sharp edges, and are often used to decorate a house on Christmas Day. Some types of holly are used to make tea. The leaves of the Holly don't fall of in the winter because they're very thick and have a waxy layer on them. 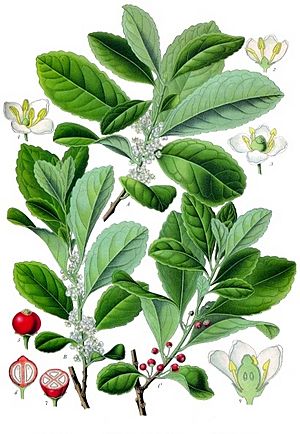 The genus Ilex is widespread throughout the temperate and subtropical regions of the world. It includes species of trees, shrubs, and climbers, with evergreen or deciduous foliage and inconspicuous flowers. Its range was more extended in the Tertiary period and many species are adapted to laurel forest habitat. It occurs from sea level to more than 2,000 metres (6,600 ft) with high mountain species. It is a genus of small, evergreen trees with smooth, glabrous, or pubescent branchlets. The plants are generally slow-growing with some species growing to 25 m (82 ft) tall. The type species is the European holly Ilex aquifolium described by Linnaeus.

Plants in this genus have simple, alternate glossy leaves, frequently with a spiny leaf margin. The inconspicuous flower is greenish white, with four petals. They are generally dioecious, with male and female flowers on different plants.

The small fruits of Ilex, although often referred to as berries, are technically drupes. They range in color from red to brown to black, and rarely green or yellow. The "bones" contain up to ten seeds each. Some species produce fruits parthenogenetically, such as the cultivar 'Nellie R. Stevens'. The fruits ripen in winter and thus provide winter colour contrast between the bright red of the fruits and the glossy green evergreen leaves. Hence the cut branches, especially of I. aquifolium, are widely used in Christmas decoration. The fruits are generally slightly toxic to humans, and can cause vomiting and diarrhea when ingested. However, they are an important food source for birds and other animals, which help disperse the seeds. Unfortunately this can have negative impacts as well. Along the west coast of North America, from California to British Columbia, English Holly (Ilex aquifolium), which is grown commercially, is quickly spreading into native forest habitat, where it thrives in shade and crowds out native species. It has been placed on the Washington State Noxious Weed Control Board's monitor list, and is a Class C invasive plant in Portland.

The genus is distributed throughout the world's different climates. Most species make their home in the tropics and subtropics, with a worldwide distribution in temperate zones. The greatest diversity of species is found in the Americas and in Southeast Asia.

In Europe the genus is represented by a single species, the classically named holly Ilex aquifolium, and in continental Africa by this species and (Ilex mitis). Ilex canariensis, from Macaronesia, and Ilex aquifolium arose from a common ancestor in the laurel forests of the Mediterranean. Australia, isolated at an early period, has (Ilex arnhemensis).

Of 204 species growing in China, 149 species are endemic. A species which stands out for its economic importance in Spanish-speaking countries is Ilex paraguariensis or Yerba mate. Having evolved numerous species that are endemic to islands and small mountain ranges, and being highly useful plants, many hollies are now becoming rare.

Often the tropical species are especially threatened by habitat destruction and overexploitation. At least two species of Ilex have become extinct recently, and many others are barely surviving.

They are extremely important food for numerous species of birds, and also are eaten by other wild animals. In the autumn and early winter the fruits are hard and apparently unpalatable. After being frozen or frosted several times, the fruits soften, and become milder in taste. During winter storms, birds often take refuge in hollies, which provide shelter, protection from predators (by the spiny leaves), and food. The flowers are sometimes eaten by the larva of the double-striped pug moth (Gymnoscelis rufifasciata). Other Lepidoptera whose larvae feed on holly include Bucculatrix ilecella, which feeds exclusively on hollies, and the engrailed (Ectropis crepuscularia).

Holly berries can cause vomiting and diarrhoea. They are especially dangerous in cases involving accidental consumption by children attracted to the bright red berries. Ingestion of over 20 berries may be fatal to children.

Holly leaves, if eaten, might cause diarrhea, nausea, vomiting, and stomach and intestinal problems.

Holly plants might be toxic to pets and livestock.

Leaves of some holly species are used by some cultures to make daily tea. These species are Yerba mate (I. paraguariensis), Ilex guayusa, Kuding (Ilex kaushue), Yaupon (I. vomitoria) and others. Leaves of other species, such as gallberry (I. glabra) are bitter and emetic. In general little is known about inter-species variation in constituents or toxicity of hollies. 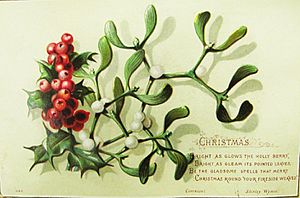 Traditional Christmas card with holly and mistletoe. Circa 1880s

Holly – more specifically the European holly, Ilex aquifolium – is commonly referenced at Christmas time, and is often referred to by the name Christ's thorn. In many Western Christian cultures, holly is a traditional Christmas decoration, used especially in wreaths and illustrations, for instance on Christmas cards.

All content from Kiddle encyclopedia articles (including the article images and facts) can be freely used under Attribution-ShareAlike license, unless stated otherwise. Cite this article:
Holly Facts for Kids. Kiddle Encyclopedia.