Flowering plant sexuality describes some of the technical terms for common arrangements of flowers. 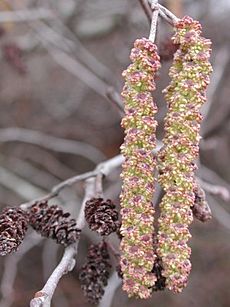 Some plants even have mixes that include all three types of flowers, where some flowers are only male, some are only female and some are both male and female.

A distinction needs to be made between arrangements in single plants versus the larger plant population.

Some plants also undergo what is called sex-switching, like Arisaema triphyllum which express sexual differences at different stages of growth. In some arums smaller plants produce all or mostly male flowers and as plants grow larger over the years the male flowers are replaced by more female flowers on the same plant. Arisaema triphyllum thus covers a multitude of sexual conditions in its life time; from nonsexual juvenile plants to young plants that are all male, as plants grow larger they have a mix of both male and female flowers, to large plants that have mostly female flowers.

Other plant populations have plants that produce more male flowers early in the year and as plants bloom later in the growing season they produce more female flowers. In plants like Thalictrum dioicum all the plants in the species are either male or female.

Specific terms are used to describe the sexual expression of individual plants within a population. 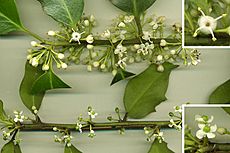 All content from Kiddle encyclopedia articles (including the article images and facts) can be freely used under Attribution-ShareAlike license, unless stated otherwise. Cite this article:
Flowering plant sexuality Facts for Kids. Kiddle Encyclopedia.