Ilex vomitoria, commonly known as yaupon or yaupon holly, is a species of holly that is native to southeastern North America. The word yaupon was derived from the Catawban yą́pą, from yą- tree + pą leaf. Another common name, cassina, was borrowed from Timucua (despite this, it usually refers to Ilex cassine). The Latin name comes from an incorrect belief by Europeans that the plant caused vomiting in certain ceremonies.

The plant was traditionally used by Native Americans to make an infusion containing caffeine. It is only one of two known plants endemic to North America that produce caffeine. The other is Ilex cassine, commonly known as dahoon holly. Yaupon is also widely used for landscaping in its native range.

Yaupon holly is an evergreen shrub or small tree reaching 5–9 m tall, with smooth, light gray bark and slender, hairy shoots. The leaf arrangement is alternate, with leaves ovate to elliptical and a rounded apex with crenate or coarsely serrated margin, 1–4.5 cm long and 1–2 cm broad, glossy dark green above, slightly paler below. The flowers are 5–5.5 mm diameter, with a white four-lobed corolla. The fruit is a small round, shiny, and red (occasionally yellow) drupe 4–6 mm diameter containing four pits, which are dispersed by birds eating the fruit. The species may be distinguished from the similar Ilex cassine by its smaller leaves with a rounded, not acute apex.

I. vomitoria occurs in the United States from the Eastern Shore of Virginia south to Florida and west to Oklahoma and Texas. A disjunct population occurs in the Mexican state of Chiapas. It generally occurs in coastal areas in well-drained sandy soils, and can be found on the upper edges of brackish and salt marshes, sandy hammocks, coastal sand dunes, inner-dune depressions, sandhills, maritime forests, nontidal forested wetlands, well-drained forests and pine flatwoods. 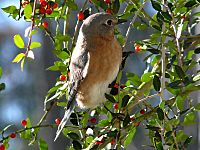 An eastern bluebird eating the bright red berries from an Ilex vomitoria.

Native Americans brewed the leaves and stems to brew a tisane, commonly thought to be called asi or black drink for male-only purification and unity rituals. The ceremony included vomiting, and Europeans deduced that yaupon caused it (hence the Latin name - Ilex vomitoria). The active ingredients, like those of the related yerba mate and guayusa plants, are caffeine, theobromine, and theophylline; the vomiting may have resulted from the great quantities in which they drank the beverage, coupled with fasting. The popular writer on edible wild plants, Euell Gibbons, who was not an expert in ethnobotany, believed the Europeans improperly assumed the black drink to be the Ilex vomitoria infusion, asserting that it was an entirely different drink made from various roots and herbs and did have emetic properties.

Native Americans may have also used the infusion as a laxative. Recently, the process of drying the leaves for consumption has been adopted by modern Americans, and yaupon is now commercially available.

Ilex vomitoria is a common landscape plant in the Southeastern United States. The most common cultivars are slow-growing shrubs popular for their dense, evergreen foliage and their adaptability to pruning into hedges of various shapes. These include:

All content from Kiddle encyclopedia articles (including the article images and facts) can be freely used under Attribution-ShareAlike license, unless stated otherwise. Cite this article:
Yaupon Facts for Kids. Kiddle Encyclopedia.