The nine-banded armadillo is spreading more far out in both the north and east of the United States. It crossed the Rio Grande from Mexico in the late 19th century. At the same time, it was introduced in Florida by humans. By 1995, the species was found in Texas, Oklahoma, Louisiana, Arkansas, Mississippi, Alabama, and Florida, and recently seen as far north as southern Nebraska, Illinois, and Indiana. The main reason of this fast expansion is because the species have few or no natural predators in the United States. It is also because Americans do not hunt or eat the armadillo. In late 2009, the state of North Carolina considered a hunting season for armadillo to slow them down. Outside the United States, the nine-banded armadillo is in Central and South America and northern Argentina and Uruguay.

Nine-banded armadillos are mostly insectivores. They find their meals by pushing their snouts into soil and digging. They dig up grubs, beetles, ants, termites, and worms. They sometimes also eat amphibians, small reptiles, fungi, and carrion. 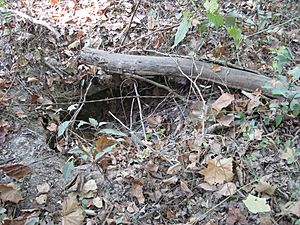 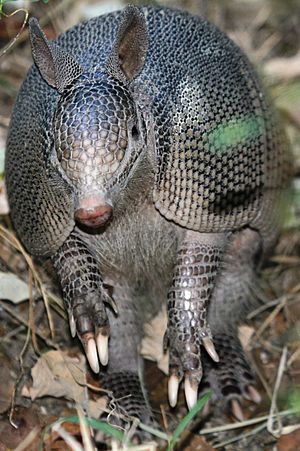 Nine-banded armadillos do not live in groups. They are nocturnal, which means that they are lively at night instead of the day. The burrows they make are about 8 inches (20 cm) wide, 7 feet (2.1 m) deep, and 25 feet (7.6 m) long. Armadillos usually mark their territory. The armadillo can jump 3–4 feet (91–122 cm) in the air when scared. This may be dangerous on roads, because it could get hit by a car.

Mating is usually done from July to August in the Northern Hemisphere and November to January in the Southern Hemisphere. A single egg is fertilized. Then it splits into four identical embryos, each which makes its own placenta. The nine-banded armadillo gives birth to genetically identical quadruplets.

After birth, the quadruplets remain in the burrow, drinking the mother's milk for about three months. Then they begin to hunt for their meals with the mother. After six months to a year, they leave.

A single female can produce up to 56 young over the course of her life.

All content from Kiddle encyclopedia articles (including the article images and facts) can be freely used under Attribution-ShareAlike license, unless stated otherwise. Cite this article:
Nine-banded armadillo Facts for Kids. Kiddle Encyclopedia.