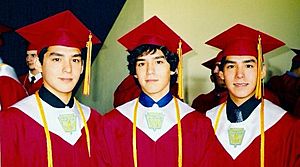 Multiple birth is when one woman gives birth to more than one child at the same time. Depending on the number of children born, it can be called twins (two), triplets (three), quadruplets (four), and so on. There have been cases known in which woman gave birth to eight children at once. The chance of multiple birth grows when artificial insemination is used. 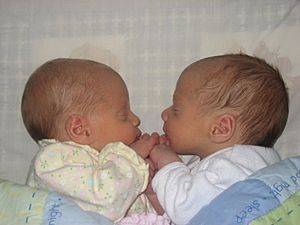 Fraternal twins at two weeks old. The technical term for "fraternal" is "polyzygotic". 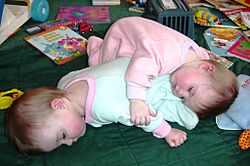 Fraternal twin sisters taking a nap. Nonidentical twins, the most common kind of multiple birth among humans, occur in about 1 out of every 80 pregnancies.

Terms used for the number of offspring in a multiple birth:

Terms used for multiple births or the genetic relationships of their offspring:

Multiple pregnancies are also classified by how the fetuses are surrounded by one or more placentas and amniotic sacs; the placentas are referenced as "chorions":

In humans, the average length of pregnancy (two weeks fewer than gestation) is 38 weeks with a single fetus. This average decreases for each additional fetus: to thirty-six weeks for twin births, thirty-two weeks for triplets, and thirty weeks for quadruplets. With the decreasing gestation time, the risks from immaturity at birth and subsequent viability increase with the size of the sibling group. Only as of the twentieth century have more than four all survived infancy.

Recent history has also seen increasing numbers of multiple births. In the United States, it has been estimated that by 2011, 36% of twin births and 78% of triplet and higher-order births resulted from conception by assisted reproductive technology.

Twins are by far the most common form of multiple births in humans. 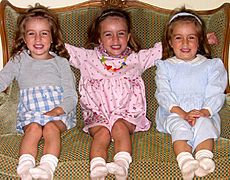 Identical triplets like these three sisters occur when a single fertilized egg splits in two and then one of the resulting two eggs splits again.

Identical triplets come from a monozygotic pregnancy, three fetuses from one egg.

Triplets are far less common than twins. Nevertheless, only 4 sets of identical triplets were reported in the U.S. during 2015, about one in a million.

Identical triplets or quadruplets are very rare and result when the original fertilized egg splits and then one of the resultant cells splits again (for triplets) or, even more rarely, a further split occurs (for quadruplets). The odds of having identical triplets is unclear. News articles and other non-scientific organizations give odds from one in 60,000 to one in 200 million pregnancies. 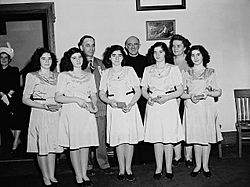 The Canadian Dionne sisters, seen in this 1947 photograph, were the first quintuplets known to survive infancy.

Quintuplets occur naturally in 1 in 55,000,000 births. The first quintuplets known to survive infancy were the all-female Canadian Dionne Quintuplets, born in 1934. Quintuplets are sometimes referred to as "quins" in the UK and "quints" in North America.

The Gosselin sextuplets with their parents and sisters, cover of KoreAm, May 2008

In 1997, the McCaughey septuplets were born in Carlisle, Iowa. Multiple births of as many as eight babies have been born alive, the first set on record to the Chukwu family in Texas in 1998; one died and seven survived. In 2009, a second set, the Suleman octuplets, were born in Bellflower, California. As of 2014, all were still alive shortly before their fifth birthday.

All content from Kiddle encyclopedia articles (including the article images and facts) can be freely used under Attribution-ShareAlike license, unless stated otherwise. Cite this article:
Multiple birth Facts for Kids. Kiddle Encyclopedia.