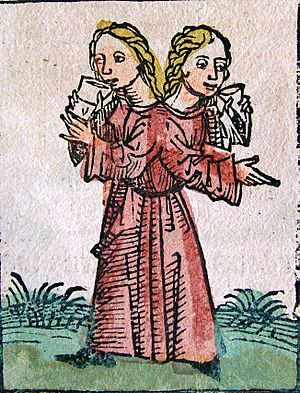 Conjoined twins are identical twins joined in utero. An extremely rare phenomenon, the occurrence is estimated to range from 1 in 49,000 births to 1 in 189,000 births, with a somewhat higher incidence in Southeast Asia and Africa. Approximately half are stillborn, and an additional one-third die within 24 hours. Most live births are female, with a ratio of 3:1.

The most famous pair of conjoined twins was Chang and Eng Bunker (Thai: อิน-จัน, In-Chan) (1811–1874), Thai brothers born in Siam, now Thailand. They traveled with P.T. Barnum's circus for many years and were labeled as the Siamese twins. Chang and Eng were joined by a band of flesh, cartilage, and their fused livers at the torso. In modern times, they could have been easily separated. Due to the brothers' fame and the rarity of the condition, the term "Siamese twins" came to be used as a synonym for conjoined twins.

Other less-common types of conjoined twins include:

Embryo splitting in which zygote divide asexually, to produce identical children, is blocked by mitosis inhibitor.

Surgery to separate conjoined twins may range from very easy to very difficult depending on the point of attachment and the internal parts that are shared. Most cases of separation are extremely risky and life-threatening. In many cases, the surgery results in the death of one or both of the twins, particularly if they are joined at the head or share a vital organ. This makes the ethics of surgical separation, where the twins can survive if not separated, contentious. Alice Dreger of Northwestern University found the quality of life of twins who remain conjoined to be higher than is commonly supposed. Lori and George Schappell and Abby and Brittany Hensel are notable examples.

In 1955, neurosurgeon Harold Voris (1902-1980) and his team at Mercy Hospital in Chicago performed the first successful operation to separate Siamese twins conjoined (Craniopagus twins) at the head, which resulted in long-term survival for both. The larger girl was reported in 1963 as developing normally, but the smaller was permanently impaired.

In 1957, Bertram Katz and his surgical team made international medical history performing the world's first successful separation of conjoined twins sharing a vital organ. Omphalopagus twins John Nelson and James Edward Freeman (Johnny and Jimmy) were born to Mr. and Mrs. William Freeman of Youngstown, Ohio, on April 27, 1956. The boys shared a liver but had separate hearts and were successfully separated at North Side Hospital in Youngstown, Ohio by Bertram Katz. The operation was funded by the Ohio Crippled Children's Service Society.

Recent successful separations of conjoined twins include that of the separation of Ganga & Jamuna Shreshta in 2001, who were born in Kathmandu, Nepal, in 2000. The 197-hour surgery on the pair of craniopagus twins was a landmark one which took place in Singapore; the team was led by neurosurgeons Chumpon Chan and Keith Goh. The surgery left Ganga with brain damage and Jamuna unable to walk. Seven years later, Ganga Shrestha died at the Model Hospital in Kathmandu in July 2009, at the age of 8, three days after being admitted for treatment of a severe chest infection.

A case of particular interest was that of infants Rose and Grace ("Mary" and "Jodie") Attard, conjoined twins from Malta who were separated in Great Britain by court order Re A (Children) (Conjoined Twins: Surgical Separation) over the religious objections of their parents, Michaelangelo and Rina Attard. The surgery took place in November, 2000, at St Mary's Hospital in Manchester. The operation was controversial because Rose, the weaker twin, would die as a result of the procedure as her heart and lungs were dependent upon Grace's. (The twins were attached at the lower abdomen and spine.) However, if the operation had not taken place, it was certain that both twins would die. Grace survived to enjoy a normal childhood.

In 2003 two 29-year-old women from Iran, Ladan and Laleh Bijani, who were joined at the head but had separate brains (craniopagus) were surgically separated in Singapore, despite surgeons' warnings that the operation could be fatal to one or both. Their complex case was accepted only because high tech graphical imagery and modelling would allow the medical team to plan the risky surgery. Unfortunately, an undetected major vein hidden from the scans was discovered during the operation. The separation was completed but both women died while still in surgery on July 8, 2003. 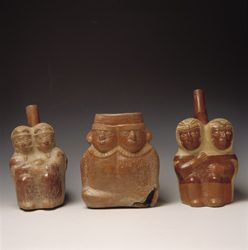 The Moche culture of ancient Peru depicted conjoined twins in their ceramics dating back to 300 CE. Writing around 415 CE, St. Augustine of Hippo in his book City of God refers to a man "double in his upper, but single in his lower half--having two heads, two chests, four hands, but one body and two feet like an ordinary man." The earliest known documented case of conjoined twins dates from the year 942, when a pair of conjoined twin brothers from Armenia were brought to Constantinople for medical evaluation.

In Arabia, the twin brothers Hashim ibn Abd Manaf and 'Abd Shams were born with Hashim's leg attached to his twin brother's head. Legend says that their father, Abd Manaf ibn Qusai, separated his conjoined sons with a sword and that some priests believed that the blood that had flowed between them signified wars between their progeny (confrontations did occur between Banu al'Abbas and Banu Ummaya ibn 'Abd Shams in the year 750 AH). The Muslim polymath Abū al-Rayhān al-Bīrūnī described conjoined twins in his book Kitab-al-Saidana.

The English twin sisters Mary and Eliza Chulkhurst, who were conjoined at the back (pygopagus), lived from 1100 to 1134 (or 1500 to 1534) and were perhaps the best-known early historical example of conjoined twins. Other early conjoined twins to attain notice were the "Scottish brothers", allegedly of the dicephalus type, essentially two heads sharing the same body (1460–1488, although the dates vary); the pygopagus Helen and Judith of Szőny, Hungary (1701–1723), who enjoyed a brief career in music before being sent to live in a convent; and Rita and Cristina of Parodi of Sardinia, born in 1829. Rita and Cristina were dicephalus tetrabrachius (one body with four arms) twins and although they died at only eight months of age, they gained much attention as a curiosity when their parents exhibited them in Paris. 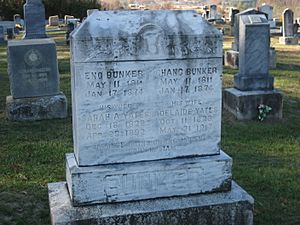 Several sets of conjoined twins lived during the nineteenth century and made careers for themselves in the performing arts, though none achieved quite the same level of fame and fortune as Chang and Eng. Most notably, Millie and Christine McCoy (or McKoy), pygopagus twins, were born into slavery in North Carolina in 1851. They were sold to a showman, J.P. Smith, at birth, but were soon kidnapped by a rival showman. The kidnapper fled to England but was thwarted because England had already banned slavery. Smith traveled to England to collect the girls and brought with him their mother, Monimia, from whom they had been separated. He and his wife provided the twins with an education and taught them to speak five languages, play music, and sing. For the rest of the century the twins enjoyed a successful career as "The Two-Headed Nightingale" and appeared with the Barnum Circus. In 1912 they died of tuberculosis, 17 hours apart.

Giovanni and Giacomo Tocci, from Locana, Italy, were immortalized in Mark Twain's short story "Those Extraordinary Twins" as fictitious twins Angelo and Luigi. The Toccis, born in 1877, were dicephalus tetrabrachius twins, having one body with two legs, two heads, and four arms. From birth they were forced by their parents to perform and never learned to walk, as each twin controlled one leg (in modern times physical therapy allows twins like the Toccis to learn to walk on their own). They are said to have disliked show business. In 1886, after touring the United States, the twins returned to Europe with their family, where they fell very ill. They are believed to have died around this time, though some sources claim they survived until 1940, living in seclusion in Italy.

All content from Kiddle encyclopedia articles (including the article images and facts) can be freely used under Attribution-ShareAlike license, unless stated otherwise. Cite this article:
Conjoined twins Facts for Kids. Kiddle Encyclopedia.