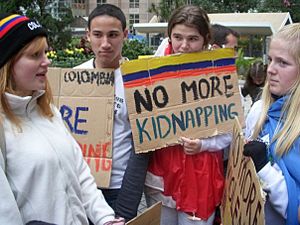 In criminal law, kidnapping is the unlawful carrying away and confinement of a person against their will. It can also be defined as false imprisonment by means of abduction, both of which are separate crimes that when committed simultaneously upon the same person merge as the single crime of kidnapping.

The abduction element is typically but not necessarily conducted by means of force or fear. That is, the perpetrator may use a weapon to force the victim into a vehicle, but it is still kidnapping if the victim is enticed to enter the vehicle willingly, e.g., in the belief it is a taxicab.

Kidnapping may be done to demand for ransom in exchange for releasing the victim, or for other illegal purposes. Kidnapping can be accompanied by bodily injury which elevates the crime to aggravated kidnapping.

In the past, and presently in some parts of the world (such as southern Sudan), kidnapping is a common means used to obtain slaves and money through ransom. In less recent times, kidnapping in the form of shanghaiing men was used to supply merchant ships in the 19th century with sailors.

Criminal gangs are estimated to make up to $500 million a year in ransom payments from kidnapping. Kidnapping has been identified as one source by which terrorist organizations have been known to obtain funding.

All content from Kiddle encyclopedia articles (including the article images and facts) can be freely used under Attribution-ShareAlike license, unless stated otherwise. Cite this article:
Kidnapping Facts for Kids. Kiddle Encyclopedia.