Mount Airy is a city in Surry County, North Carolina, United States. As of the 2010 census, the city population was 10,388. The town is perhaps best known internationally as the home of actor Andy Griffith and the inspiration for the fictional town of Mayberry on his eponymous show.

Mount Airy was settled in the 1750s as a stagecoach stop on the road between Winston-Salem, North Carolina and Galax, Virginia. It was named for a nearby plantation. Mount Airy was incorporated in 1885. 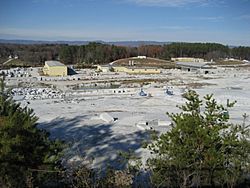 There were 3,667 households out of which 24.3% had children under the age of 18 living with them, 40.6% were married couples living together, 14.0% had a female householder with no husband present, and 41.9% were non-families. 38.5% of all households were made up of individuals and 19.6% had someone living alone who was 65 years of age or older. The average household size was 2.16 and the average family size was 2.87.

Actor Andy Griffith was born in Mount Airy, and the town is believed to have been the basis for Mayberry, the setting of the TV shows The Andy Griffith Show and Mayberry RFD. The community holds an annual "Mayberry Days" celebration during the last weekend of September; 30,000 attended in 2009, and 50,000 were expected for the show's 50th anniversary in 2010. The University of North Carolina at Greensboro estimates the town receives $5 million each year as a result. Surviving members of the cast, along with family members of other cast members, often visit. The 2012 event was slated to have Karen Knotts (Don's daughter) and George Lindsey Jr. (eponymous son of the actor who portrayed Goober).

Three Ford Galaxie police cars, painted to resemble those used on the show, give rides to tourists. A barber shop has been named "Floyd's", and a salvage yard has the name Mayberry.

The Andy Griffith Museum, founded in 2009 by Emmett Forrest, attracts 200 visitors a day. The 2,500-square-feet museum, located half a mile from Griffith's childhood home, houses the world's largest collection of Andy Griffith memorabilia.

The home of old-time music legend Tommy Jarrell and country singer Donna Fargo, Mount Airy has a long history with regional music. Mount Airy's WPAQ 740 AM radio is one of the few Bluegrass and Old-Time music stations still operating and has been airing the live radio show Merry-Go-Round from the Downtown Cinema Theatre since 1948. Weekly bluegrass jam sessions at The Andy Griffith Playhouse and the annual Mount Airy Fiddlers Convention also serve to attract old-time musicians from across the region and the world. The Blue Ridge Music Center with its amphitheater and music museum of old-time music is just a few miles away on the Blue Ridge Parkway at Milepost 213, near Galax, Virginia. This area is home to the Round Peak style of old-time music, which started in the Round Peak community, just north of Mount Airy.

Mount Airy was the residence of Chang and Eng Bunker (1811–1874), conjoined twins joined by a band of cartilage at the chest (xiphopagus). They are buried at White Plains Baptist Church about 10 miles from Mt Airy Main street.

All content from Kiddle encyclopedia articles (including the article images and facts) can be freely used under Attribution-ShareAlike license, unless stated otherwise. Cite this article:
Mount Airy, North Carolina Facts for Kids. Kiddle Encyclopedia.