Winston-Salem is called the "Twin City" for its dual heritage and "the Camel City" is a reference to the city's historic involvement in the tobacco industry related to locally based R.J. Reynolds' Camel cigarettes. Many natives of the city and North Carolina refer to the city as "Winston" in informal speech. Winston-Salem is also home to six colleges and institutions, most notably Wake Forest University, Winston-Salem State University, and the University of North Carolina School of the Arts, which ranks as one of the best film schools in America. In 2021, the city ranked No. 46 out of 150 cities on the "Best Places to Live" list from U.S. News & World Report. In April 2021, a study from Lendingtree's Magnify Money blog ranked Winston-Salem as the second-best tech market for women.

The city of Winston Salem is a product of the merging of the two neighboring towns of Winston and Salem in 1913.

The origin of the town of Salem dates to January 1753, when Bishop August Gottlieb Spangenberg, on behalf of the Moravian Church, selected a settlement site in the three forks of Muddy Creek. He called this area "die Wachau" (Latin form: Wachovia) named after the ancestral estate of Count Nicolaus Ludwig von Zinzendorf. The land, just short of 99,000 acres (400 km2), was subsequently purchased from John Carteret, 2nd Earl Granville.

On November 17, 1753, the first settlers arrived at what would later become the town of Bethabara. This town, despite its rapid growth, was not designed to be the primary settlement on the tract. Some residents expanded to a nearby settlement called Bethania in 1759. Finally, lots were drawn to select among suitable sites for the location of a new town. 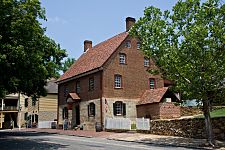 The town established on the chosen site was given the name of Salem (from "Shalom" meaning "Peace",after the Canaanite city mentioned in the Book of Genesis) chosen for it by the Moravians' late patron, Count Zinzendorf. On January 6, 1766, the first tree was felled for the building of Salem. Salem was a typical Moravian settlement congregation with the public buildings of the congregation grouped around a central square, today Salem Square. These included the church, a Brethren's House and a Sisters' House for the unmarried members of the Congregation, which owned all the property in town. For many years only members of the Moravian Church were permitted to live in the settlement. This practice had ended by the American Civil War. Many of the original buildings in the settlement have been restored or rebuilt and are now part of Old Salem Museums & Gardens.

Salem was incorporated as a town in December 1856. Salem Square and "God's Acre", the Moravian Graveyard, since 1772 are the site each Easter morning of the world-famous Moravian sunrise service. This service, sponsored by all the Moravian church parishes in the city, attracts thousands of worshipers each year.

In 1849, the Salem congregation sold land north of Salem to the newly formed Forsyth County for a county seat. The new town was called "the county town" or Salem until 1851 when it was named Winston for a local hero of the Revolutionary War, Joseph Winston. For its first two decades, Winston was a sleepy county town. In 1868, work began by Salem and Winston business leaders to connect the town to the North Carolina Railroad. That same year, Thomas Jethro Brown of Davie County rented a former livery stable and established the first tobacco warehouse in Winston. That same year, Pleasant Henderson Hanes, also of Davie, built his first tobacco factory a few feet from Brown's warehouse. In 1875, Richard Joshua Reynolds, of Patrick County, Virginia, built his first tobacco factory a few hundred feet from Hanes's factory. By the 1880s, there were almost 40 tobacco factories in the town of Winston. Hanes and Reynolds would compete fiercely for the next 25 years, each absorbing a number of the smaller manufacturers, until Hanes sold out to Reynolds in 1900 to begin a second career in textiles. 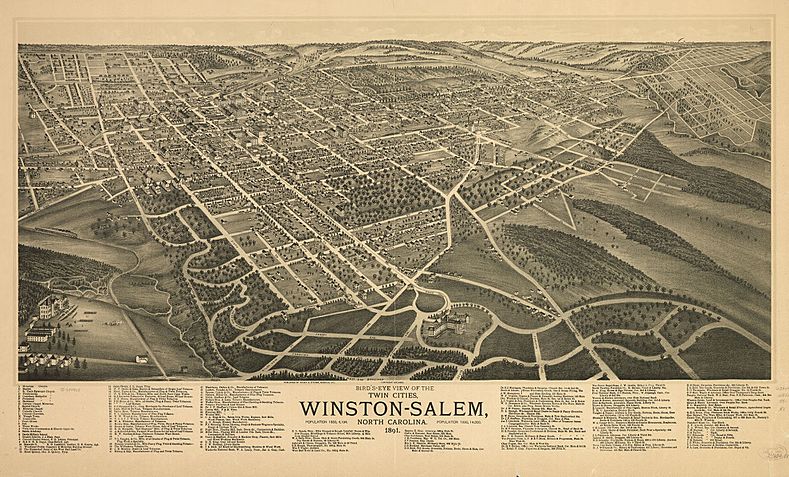 A map of then known "Winston-Salem" in 1891, showing the development of Main Street and Fourth Street during the industrial tobacco boom--dozens of tobacco factories appear in downtown Winston, including ones owned by Hanes and Reynolds.

In the 1880s, the US Post Office began referring to the two towns as Winston-Salem. In 1899, after nearly a decade of contention, the United States Post Office Department established the Winston-Salem post office in Winston, with the former Salem office serving as a branch. After a referendum the towns were officially incorporated as "Winston-Salem" in 1913. The USPS Address Information System (AIS) does not recognize the hyphen. Ironically, the sign hanging on the USPS location in downtown Winston-Salem reads "United States Postal Service, Winston-Salem, NC." 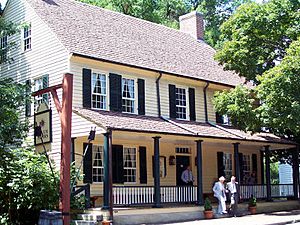 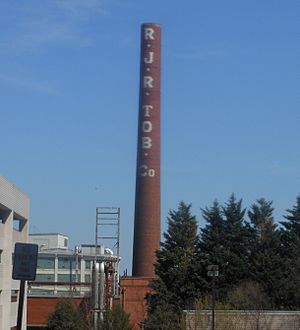 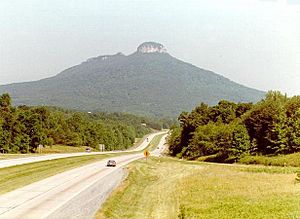 Pilot Mountain, a nearby member of the Sauratown Mountains. Winston-Salem is visible from its peak.

Less than 30 miles (48 km) north of Winston-Salem are the remains of the ancient Sauratown Mountains, named for the Saura people who lived in much of the Piedmont area, including where is now Winston-Salem.

Winston-Salem's population grew by 9.2% from 2010 to 2020, making it the fifth largest city in North Carolina.

38.4% were married couples living together, 17.3% had a female householder with no husband present, and 39.7% were non-families. 33.1% of all households were made up of individuals, and 10.3% had someone living alone who was 65 years of age or older. The average household size was 2.38 and the average family size was 3.06. 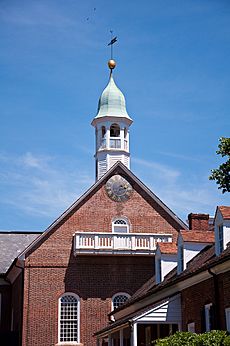 Winston-Salem is the most religious city in North Carolina,‘ with 54.14% of the population being religiously affiliated. Christianity is the largest religion, with Baptists (15.77%) making up the largest religious group, followed by Methodists (12.79%) and Catholics (4.39%). Pentecostals (2.97%), Episcopalians (1.3%), Presbyterians (2.59%), Lutherans (0.96%), Latter-Day Saints (0.90%) make up a significant amount of the Christian population as well. The remaining Christian population (11.93%) is affiliated with other churches such as the Moravians and the United Church of Christ. Islam (0.43%) is the second largest religion after Christianity, followed by Judaism (0.20%). Eastern religions (0.02%) make up the religious minority.

The city's long history with the Moravian church has had a lasting cultural effect. The Moravian star is used as the city's official Christmas street decoration. In addition, a 31-foot Moravian star, one of the largest in the world, sits atop the North Tower of Wake Forest Baptist Medical Center during the Advent and Christmas seasons. Another star sits under Wake Forest University's Wait Chapel during the Advent and Christmas seasons as well. Also, Moravian star images decorate the lobby of the city's landmark Reynolds Building.

The city's Arts District is centered around Sixth and Trade Streets, where there are many galleries and workshops; nearby is also the ARTivity on the Green art park, established by Art for Art's Sake.

It is also home to the Southeastern Center for Contemporary Art (SECCA), a nationally known art center, as well as the Reynolda House Museum of American Art (the restored 1917 mansion built by the founder of the R. J. Reynolds Tobacco Company and now affiliated with Wake Forest University), displays a premiere collection of American art.

The city plays host to the National Black Theatre Festival, the RiverRun International Film Festival and the Reynolda Film Festival.

Winston-Salem is also the home of the Art-o-mat and houses nine of them throughout the city.

Once a year the city is also the home of the Heavy Rebel Weekender music festival, featuring over 70 bands, primarily rockabilly, punk and honky tonk, over three days. 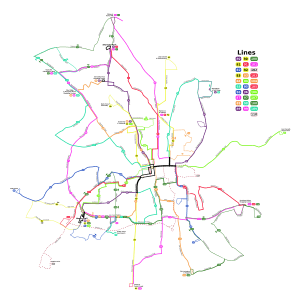 The Winston-Salem Transit Authority (WSTA) has the responsibility of providing public transportation. It took over from the Safe Bus Company, founded in the 1920s as the largest black-owned transportation company in the United States, in 1972. Operating out of the Clark Campbell Transportation Center at 100 West Fifth Street, WSTA operates 30 daytime bus routes, 24 of which provide night service; 24 routes that operate from morning until midnight on Saturday and 16 Sunday routes. WSTA makes nearly 3 million passenger trips annually. In February 2010 WSTA added 10 diesel-electric buses to its fleet.

The Piedmont Authority for Regional Transportation (PART) operates a daily schedule from the Campbell center connecting Winston-Salem to Boone, Mt. Airy, High Point and Greensboro, where other systems provide in-state routes to points east. PART also offers the Route 5 (Amtrak Connector) which provides daily service to and from the Amtrak Station in High Point with multiple times during the day. 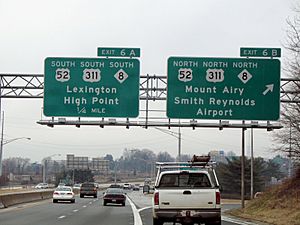 US 421 (Formerly Business I-40) at the US 52 interchange in downtown Winston-Salem. (US 311 has since been truncated further north)

US 52 (which runs concurrent with NC 8) is the predominant north–south freeway through Winston-Salem; it passes near the heart of downtown. US 421 is the main east–west freeway through downtown Winston-Salem; this was the original routing of I-40, and was the main east–west route through the city until 1992, when a bypass loop of I-40 was built. US 421 splits in the western part of the city onto its own freeway west (signed north) toward Wilkesboro, North Carolina and Boone, North Carolina. I-74 (which was once US 311) links Winston-Salem to High Point (southeast). Silas Creek Parkway is an expressway that loops around the western side of the city and it serves as a popular route for drivers going to Wake Forest University, Hanes Mall, Forsyth Medical Center, and Forsyth Tech. It also serves as an alternative route for I 40 and US 421 drivers going through the city.

The Winston-Salem Northern Beltway is a proposed freeway that will loop around the city to the north, providing a route for the Future I-74 on the eastern section and the Future Auxiliary Route I-274 on the western section. The NCDOT plans for this project to begin after 2010. 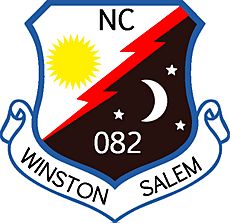 Winston-Salem is served by Piedmont Triad International Airport. The airport also serves much of the surrounding Piedmont Triad area, including Greensboro and High Point; the Authority that manages the airport is governed by board members appointed by all three cities as well as both of their counties, Guilford and Forsyth.

Winston-Salem is one of the larger cities in the South that is not directly served by Amtrak. However, an Amtrak Thruway Motorcoach operates three times daily in each direction between Winston-Salem and the Amtrak station in nearby High Point, 16 miles east. Buses depart from the Winston-Salem Transportation Center, then stop on the Winston-Salem State University campus before traveling to High Point. From the High Point station, riders can board the Crescent, Carolinian or Piedmont lines. These lines run directly to local North Carolina destinations as well as cities across the Southeast, as far west as New Orleans and as far north as New York City. 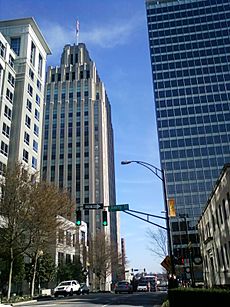 Although traditionally associated with the textile and tobacco industries, Winston-Salem is transforming itself to be a leader in the nanotech, high-tech and bio-tech fields. Medical research is a fast-growing local industry, and Wake Forest Baptist Medical Center is the largest employer in Winston-Salem. In December 2004, the city entered into a deal with Dell, providing millions of dollars in incentives to build a computer assembly plant nearby in southeastern Forsyth County. Dell closed its Winston-Salem facility in January 2010 due to the poor economy. In January 2015, Herbalife opened a manufacturing facility in the space left vacant by Dell.

According to the Winston-Salem Business Inc.'s 2012–2013 data report on major employers, the ten largest employers in the city were:

Winston-Salem hosts an ATP tennis tournament every year, the Winston-Salem Open. The matches are played at the Wake Forest tennis center. 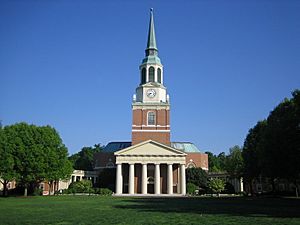 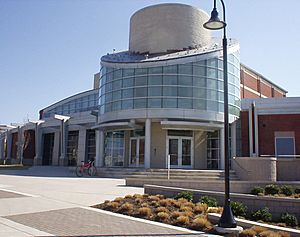 Watson Hall at University of North Carolina School of the Arts

Winston-Salem/Forsyth County Schools has most of its schools inside Winston-Salem. WS/FC Schools include 51 elementary schools, 25 middle schools and 13 high schools. The school with the largest student body population is West Forsyth High School with over 2,400 students as of the 2017–2018 school year. The district is the most diverse school system in North Carolina. Winston-Salem/Forsyth County School System is the fourth largest school system in North Carolina with about 59,000 students and over 90 schools operating in the district.

Winston-Salem has a number of colleges and universities, including:

All content from Kiddle encyclopedia articles (including the article images and facts) can be freely used under Attribution-ShareAlike license, unless stated otherwise. Cite this article:
Winston-Salem, North Carolina Facts for Kids. Kiddle Encyclopedia.