Kids Encyclopedia Facts
For the Biblical location where John the Baptist baptized those who came to him, see Bethabara.

Bethabara Historic District encompasses the surviving buildings and archaeological remains of a small Moravian community, that was first settled in 1753. Located in present-day Forsyth County, North Carolina, it is now a public park of the city of Winston-Salem. It was designated National Historic Landmark in 1999. Around the Mid 1990s a new expressway was built to help those going to Stanleyville and surrounding areas without going through Bethabara Road.

Bethabara (from the Hebrew, meaning "House of Passage" and pronounced beth-ab-bra, the name of the traditional site of the Baptism of Jesus Christ) was a village located in what is now Forsyth County, North Carolina. It was the site where fifteen men from the Moravian Church first settled in 1753 in an abandoned cabin in the 100,000-acre (400 km2) tract of land the church had purchased from Lord Granville and dubbed Wachovia.

Its early settlers were noted for advanced agricultural practices, especially their medicine Garden, which produced over fifty kinds of herbs.

Although later parties of Moravians joined the first fifteen, including women and children, Bethabara was never meant to be a permanent settlement. It was intended to house the Moravians until a more suitable location for their central village could be found. In 1771, that place was completed: Salem. Many of the settlers moved to Salem, and Bethabara became an outlying farm to supply the residents of Salem and other Moravian villages with food.

In 1788, a slave, Johann Samuel, was named superintendent of the farm; he was freed in 1801, though he continued to rent the land from the church. However, the village of Bethabara, as it existed, was no longer needed, and it fell into disuse. The original buildings collapsed, and their foundations were filled in to make more farm land. Only the church and a few other buildings continued in regular use. 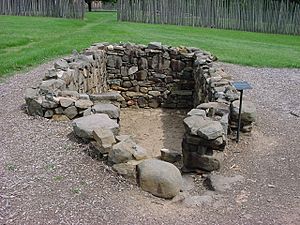 Excavated cellar of the 1762 Smith's House. 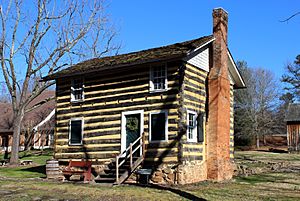 Today, what remains of the village, including the excavated foundations of the original buildings, the restored Gemeinhaus (the Bethabara Moravian Church), and the reconstructed palisade and colonial gardens, is part of Historic Bethabara Park. The 183-acre (0.74 km2) park and wildlife preserve is located in Winston-Salem and is operated by the City of Winston-Salem Recreation & Parks Department as an open-air museum. The site also features 20 miles (32 km) of nature trails. 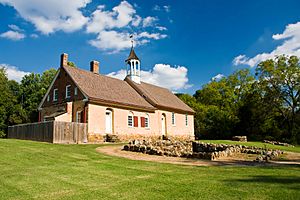 The Bethabara site was declared a National Historic Landmark in 1999. The Gemeinhaus was separately listed on the National Register of Historic Places in 1971.

All content from Kiddle encyclopedia articles (including the article images and facts) can be freely used under Attribution-ShareAlike license, unless stated otherwise. Cite this article:
Bethabara Historic District Facts for Kids. Kiddle Encyclopedia.