Kids Encyclopedia Facts
Not to be confused with the bank of the same name.

Wachovia was the area settled by Moravians in what is now Forsyth County, North Carolina, US. Of the six eighteenth-century Moravian "villages of the Lord" established in Wachovia, today, the town of Bethania, North Carolina and city of Winston-Salem exist within the historic Wachovia tract. The historical tract was somewhat larger than present-day Winston-Salem and somewhat smaller than present-day Forsyth County.

In 1752 Moravian Bishop August Gottlieb "Brother Joseph" Spangenberg led an expedition to locate the area where the Unitas Fratrum, or Moravian church, intended to begin the Wachovia settlements. Members of the Moravian Church in Europe purchased 98,985 acres (400.58 km2) of land in the backcountry (middle/western area) of North Carolina, from John Carteret, 2nd Earl Granville. They named the 98,985-acre (400.58 km2) tract of land die Wachau, or "Wachovia," meaning "meadow of the Wach."

The name "Wachovia" is the Latin form of the German "die Wachau." "Die Wachau" was chosen as the name of the North Carolina Moravian tract, to honor Count Zinzendorf, Moravian patron and bishop whose family estate was located in the Wachau region northwest of Vienna, along the Danube River between the towns of Melk and Krems. The Moravians most likely felt that the landscape in the back country of North Carolina, with its nearby mountains, local waterways including the Dan River, the Yadkin River, Town Fork Creek and three forks of Muddy Creek, and its fertile land with abundant forest, resembled the Wachau region in central Europe.

Twelve Moravian Single Brethren traveling from Pennsylvania, most from the Christiansbrunn farm near Nazareth, arrived in Wachovia in 1753, forming Bethabara, in Hebrew meaning "House of Passage", a transitional congregational settlement founded November 17, 1753. In July 1756, during the French and Indian War (1754–1763), a wooden stockade was built around the central-most area of the Moravian settlement, and Bethabara became a place of refuge for settlers from across the region, with many refugees living near the Bethabara Mill, numbering 120 by May 1759.

The first planned Moravian settlement, and oldest incorporated municipality in Wachovia is Bethania, North Carolina formed June 12, (1759), also known historically as Bethany, meaning in the Hebrew language, "house/place of dates and figs." The Town of Bethania, North Carolina was incorporated 1995, following the reactivation of Bethania's 1838/1839 town charter, and was spared from being annexed into the city of Winston-Salem. Today, Bethania remains the only independent, continuously active Moravian town in the southern United States. In 2007, Historic Bethania, a visitor center and museum, opened in Bethania, providing information and historical interpretation in yet another Wachovia Moravian community.

Wachovia's central administrative congregational town of Salem, which can be visited presently in Old Salem Museums and Gardens. Salem was begun in 1766 (formally organized in 1771), and was built by Moravians and friends from Bethabara and Bethania.

Subsequent Moravian congregational settlements to be formed include Friedberg (1769), Friedland (1772), and Hope (1775). The congregation at Hope was the first "English" Moravian church in the area.

Over time, the 98,985-acre (400.58 km2) Wachovia Tract was redrawn into the following counties as the backcountry of North Carolina became increasingly populated:

Historic Bethabara Park, Historic Bethania, and Old Salem Museums and Gardens are museums which serve to transport visitors in time to what Wachovia once was. The museums each contribute to the story of Moravians in North Carolina, and preserve, interpret, and demonstrate life in Wachovia over time. 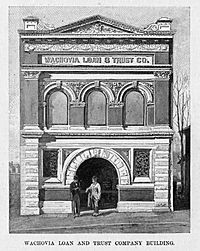 The area is the namesake and birthplace of Wachovia Corporation, one of the world's largest banks. The bank was pioneered by Bethanian I.G. Loesch. Salem, then Winston-Salem was the corporate headquarters for the bank until its merger with the First Union corporation, when the headquarters was moved to Charlotte, North Carolina.

Present day students and scholars who are not familiar with the German language frequently, albeit incorrectly, use a masculine article "der" to modify "Wachau" when the feminine article "die" should be used, as historically documented. When speaking of "Wachovia" as a place, the proper title in German is "die Wachau," or "wach" "au," translated as "meadow of the Wach," When speaking of "Wachau" in a locative sense, such as "in the Wachau," the article becomes dative and written as "in der Wachau." Many individuals and organizations have seen the dative phrase and have irresponsibly and unknowingly dropped the preposition, leaving "...der Wachau," which is incorrect when used as a proper noun. The feminine gender of "die Wachau" does not change, though the case might.

All content from Kiddle encyclopedia articles (including the article images and facts) can be freely used under Attribution-ShareAlike license, unless stated otherwise. Cite this article:
Wachovia Tract Facts for Kids. Kiddle Encyclopedia.