Kids Encyclopedia Facts
This page is about the financial services company. For the historic geographic location of the same name (after which the bank was named), see Wachovia Tract.

Wachovia was a diversified financial services company based in Charlotte, North Carolina. Before its acquisition by Wells Fargo and Company in 2008, Wachovia was the fourth-largest bank holding company in the United States, based on total assets. Wachovia provided a broad range of banking, asset management, wealth management, and corporate and investment banking products and services. At its height, it was one of the largest providers of financial services in the United States, operating financial centers in 21 states and Washington, D.C., with locations from Connecticut to Florida and west to California. Wachovia provided global services through more than 40 offices around the world.

The acquisition of Wachovia by Wells Fargo was completed on December 31, 2008, after a government-forced sale to avoid Wachovia's failure. The Wachovia brand was absorbed into the Wells Fargo brand in a process that lasted three years. On October 15, 2011, the last Wachovia branches were converted to Wells Fargo.

Wachovia, excluding subsidiaries, was the fourth largest bank at the end of 2008.

Exposed to risky loans, such as adjustable rate mortgages acquired during the acquisition of Golden West Financial in 2006, Wachovia began to experience heavy losses in its loan portfolios during the subprime mortgage crisis.

On June 2, 2008, Wachovia chief executive officer Ken Thompson was forced to retire. He'd been head of Wachovia since 2000, while it was still known as First Union. The board replaced him on an interim basis with Chairman Lanty Smith. Smith had already replaced Thompson as chairman a month earlier.

On July 9, 2008, Wachovia hired Treasury Undersecretary Bob Steel as chief executive in hopes that his experience would lead the company out of its difficulties.

After Steel took over, he insisted that Wachovia would stay independent. However, its stock price plunged 27 percent on September 26 due to the seizure of Washington Mutual the previous night. On the same day, several businesses and institutional depositors withdrew money from their accounts in order to drop their balances below the $100,000 insured by the Federal Deposit Insurance Corporation (FDIC) – an event known in banking circles as a "silent run." Ultimately, Wachovia lost a total of $5 billion in deposits that day—about one percent of the bank's total deposits. The large outflow of deposits attracted the attention of the Office of the Comptroller of the Currency, which regulates national banks. Federal regulators pressured Wachovia to put itself up for sale over the weekend. Had Wachovia failed, it would have been a severe drain on the FDIC's insurance fund due to its size (it operated one of the largest branch networks on the East Coast).

As business halted for the weekend, Wachovia was already in FDIC-brokered talks with Citigroup and Wells Fargo. Wells Fargo initially emerged as the frontrunner to acquire the ailing Wachovia's banking operations, but backed out due to concerns over Wachovia's commercial loans. With no deal in place as September 28 dawned, regulators were concerned that Wachovia wouldn't have enough short-term funding to open for business the next day. In order to obtain enough liquidity to do business, banks usually depend on short-term loans to each other. However, the markets had been so battered by a credit crisis related to the housing bubble that banks were skittish about making such loans. Under the circumstances, regulators feared that if customers pulled out more money, Wachovia wouldn't have enough liquidity to meet its obligations. This would have resulted in a failure dwarfing that of WaMu.

When FDIC Chairwoman Sheila Bair got word of Wachovia's situation, she initially decided to handle the situation like she'd handled WaMu a day earlier. Under this scenario, the Comptroller of the Currency would have seized Wachovia's banking assets and placed them under the receivership of the FDIC. The FDIC would have then sold the banking assets to the highest bidder. Bair called Steel on September 28 and told him that the FDIC would be auctioning off Wachovia's banking assets. Bair felt this would best protect the small banks. However, several Federal regulators, led by New York Fed President Tim Geithner, felt such a course would be politically unjustifiable so soon after WaMu's seizure.

After a round of mediation between Geithner and Bair, the FDIC declared that Wachovia was "systemically important" to the health of the economy, and thus could not be allowed to fail. It was the first time the FDIC had made such a determination since the passage of a 1991 law allowing the FDIC to handle large bank failures on short notice. Later that night, in an FDIC-brokered deal, Citigroup agreed to buy Wachovia's retail banking operations in an "open bank" transfer of ownership. The transaction would have been facilitated by the FDIC, with the concurrence of the Board of Governors of the Federal Reserve and the Secretary of the Treasury in consultation with the President. The FDIC's open bank assistance procedures normally require the FDIC to find the cheapest way to rescue a failing bank. However, when a bank is deemed "systemically important," the FDIC is allowed to bypass this requirement. Steel had little choice but to agree, and the decision was announced on the morning of September 29, roughly 45 minutes before the markets opened. From this point on, Citigroup became the source of liquidity allowing Wachovia to continue to operate until the acquisition was complete.

In its announcement, the FDIC stressed that Wachovia did not fail and was not placed into receivership. In addition, the FDIC said that the agency would absorb Citigroup's losses above $42 billion; Wachovia's loan portfolio was valued at $312 billion. In exchange for assuming this risk, the FDIC would receive $12 billion in preferred stock and warrants from Citigroup. The transaction would have been an all-stock transfer, with Wachovia Corporation stockholders to have received stock from Citigroup, valuing Wachovia stock at about one dollar per share for a total transaction value of about $2.16 billion. Citigroup would have also assumed Wachovia's senior and subordinated debt. Citigroup intended to sell ten billion dollars of new stock on the open market to recapitalize its purchased banking operations. The proposed closing date for the Wachovia purchase was by the end of the year, 2008.

Wachovia expected to continue as a publicly traded company, retaining its retail brokerage arm, Wachovia Securities and Evergreen mutual funds. At the time, Wachovia Securities had 14,600 financial advisers and managed more than $1 trillion, third in the U.S. after Merrill Lynch and Citigroup's Smith Barney.

The announcement drew some criticism from Wachovia stockholders who felt the dollar-per-share price was too cheap. Some of them planned to try to defeat the deal when it came up for shareholder approval. However, institutional investors such as mutual funds and pension funds controlled 73 percent of Wachovia's stock; individual stockholders would have had to garner a significant amount of support from institutional shareholders to derail the sale. Also, several experts in corporate dealmaking told The Charlotte Observer that such a strategy is very risky since federal regulators helped broker the deal. One financial expert told the Observer that if Wachovia's shareholders voted the deal down, the OCC could have simply seized Wachovia and placed it into the receivership of the FDIC, which would then sell it to Citigroup. Had this happened, Wachovia's shareholders risked being completely wiped out. 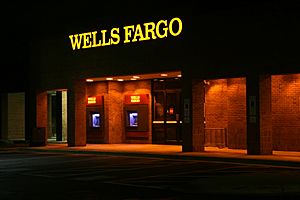 A Wells Fargo branch in Durham, North Carolina; previously a Wachovia branch until 2011.

Though Citigroup was providing the liquidity that allowed Wachovia to continue to operate, Wells Fargo and Wachovia announced on October 3, 2008, that they had agreed to merge in an all-stock transaction requiring no government involvement. Wells Fargo announced it had agreed to acquire all of Wachovia for $15.1 billion in stock. Wachovia preferred the Wells Fargo deal because it would be worth more than the Citigroup deal and keep all of its businesses intact. Also, there is far less overlap between the banks, as Wells Fargo is dominant in the West and Midwest compared to the redundant footprint of Wachovia and Citibank along the East Coast. Both companies' boards unanimously approved the merger on the night of October 2.

Citigroup explored its legal options and demanded that Wachovia and Wells Fargo cease discussions, claiming that Wells Fargo engaged in "tortious interference" with an exclusivity agreement between Citigroup and Wachovia. That agreement states in part that until October 6, 2008 "Wachovia shall not, and shall not permit any of its subsidiaries or any of its or their respective officers, directors, [...] to [...] take any action to facilitate or encourage the submission of any Acquisition Proposal.".

On October 9, 2008, Citigroup abandoned its attempt to purchase Wachovia's banking assets, allowing the Wachovia-Wells Fargo merger to go through. However, Citigroup pursued $60 billion in claims, $20 billion in compensatory and $40 billion in punitive damages, against Wachovia and Wells Fargo for alleged violations of the exclusivity agreement. Wells Fargo settled this dispute with Citigroup Inc. for $100 Million on November 19, 2010. Citigroup may have been pressured by regulators to back out of the deal; Bair endorsed Wells Fargo's bid because it removed the FDIC from the picture. Geithner was furious, claiming that the FDIC's reversal would undermine the government's ability to quickly rescue failing banks. However, Geithner's colleagues at the Fed were not willing to take responsibility for selling Wachovia.

The Federal Reserve unanimously approved the merger with Wells Fargo on October 12, 2008.

The combined company retained the Wells Fargo name, and was based in San Francisco. However, Charlotte remained as the headquarters for the combined company's East Coast banking operations, and Wachovia Securities remained in Charlotte. Three members of the Wachovia board joined the Wells Fargo board. The merger created the largest branch network in the United States.

In filings unsealed two days before the merger approval in a New York federal court, Citigroup argued that its own deal was better for U.S taxpayers and Wachovia shareholders. It said that it had exposed itself to "substantial economic risk" by stating its intent to rescue Wachovia after less than 72 hours of due diligence. Citigroup had obtained an exclusive agreement in order to protect itself. Wachovia suffered a $23.9 billion loss in the third quarter.

In September 2008, the Internal Revenue Service issued a notice providing tax breaks to companies that acquire troubled banks. According to analysts, these tax breaks were worth billions of dollars to Wells Fargo. Vice Chairman Bill Thomas of the Financial Crisis Inquiry Commission indicated that these tax breaks may have been a factor in Wells Fargo's decision to purchase Wachovia.

All content from Kiddle encyclopedia articles (including the article images and facts) can be freely used under Attribution-ShareAlike license, unless stated otherwise. Cite this article:
Wachovia Facts for Kids. Kiddle Encyclopedia.