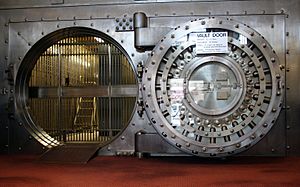 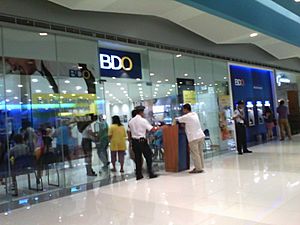 A branch of BDO Unibank in SM City BF Parañaque.

A bank is a company where money can be saved or borrowed from. Banks also invest money to build up their reserve of money. What they do is regulated by laws. Those laws differ in different countries. The people who run a bank are called bankers. Certain banks deal directly with the public and they are the only ones which an ordinary person will deal with. Other banks deal with investments and international currency trading.

Customers' money may be placed in the bank for safe keeping. Banks may give loans to customers for an agreement to pay the bank back at a later time, with interest. An example is getting a mortgage to buy a house or apartment. Banks also can use the money they have from deposit accounts to invest in businesses in order to make more money.

In most countries the rules for banks is made by the government acting through laws. A central bank (such as the Bank of England) adjusts how much money is issued at a particular time. This is a factor in the economy of a country, and the government takes the big decisions. These "banks of issue" take in, and issue out, coins and banknotes.

The word bank comes from an Italian word banco, meaning a bench, since Italian merchants in the Renaissance made deals to borrow and lend money beside a bench. They placed the money on that bench.

Elementary financial records are known from the beginning of history, Baked clay records were done before the invention of writing.

In the 17th century, merchants started storing their gold with goldsmiths in London. The goldsmiths had their own vaults, and charged a fee for storing the merchant's gold. The goldsmiths eventually started loaning money using the gold left to them, and also paid interest on the gold.

The Bank of England began issuing banknotes in 1695. The oldest bank still in existence is Monte dei Paschi di Siena in Siena, Italy, which started in 1472.

All content from Kiddle encyclopedia articles (including the article images and facts) can be freely used under Attribution-ShareAlike license, unless stated otherwise. Cite this article:
Bank Facts for Kids. Kiddle Encyclopedia.