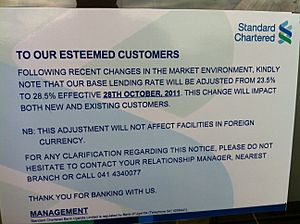 Interest is the cost for borrowing money or the payment for lending money. Usually, this is fixed as a percentage of the amount of money borrowed (which is called interest rate).

At some times in the past, or in some places today, it has been illegal to make a person pay interest on a loan. It was, or is, against some religious rules. If the interest that a person must pay is too high, this is called usury. This is often illegal today, even when lower interest is legal.

All content from Kiddle encyclopedia articles (including the article images and facts) can be freely used under Attribution-ShareAlike license, unless stated otherwise. Cite this article:
Interest Facts for Kids. Kiddle Encyclopedia.