Old Salem is a historic district of Winston-Salem, North Carolina that was originally settled by the Moravian community in 1766 . This small city features a living history museum (operated by the non-profit Old Salem Museums & Gardens, organized as Old Salem Inc.) that interprets the restored Moravian community. The non-profit organization began its work in 1950, although some private residents had restored buildings earlier. As the Old Salem Historic District, it was declared a National Historic Landmark (NHL) in 1966. and expanded in 2016. The district showcases the culture of the Moravian settlement in North Carolina during the 18th and 19th centuries, communal buildings, churches, houses, and shops.

Two buildings are individually designated as NHL: the Salem Tavern and the Single Brothers' House. Additional buildings and properties have been added to the National Register that expand the historic area (see St. Philips Moravian Church below, Single Brothers Industrial Complex Site, and West Salem Historic District). Ownership of the buildings and land is divided among Old Salem, Inc., Wachovia Historical Society, private owners, Salem College and Academy, and Salem Congregation (the successor to the Salem Congregational Council to whom all ownership of Church properties was transferred).

Salem was originally settled by members of the Moravian Church, a Protestant denomination that first began in 1457, out of the followers of John Huss (Jan Hus, 1369–1415) in the Kingdom of Bohemia and Moravia, now part of the Czech Republic. In 1722, the German-speaking exiles finally found protection on the estate of Count Zinzendorf, a Saxon nobleman, where he allowed them to create the village of Herrnhut as their home. First settling in North America in Savannah, Georgia in 1735, they moved to Pennsylvania in 1740, where they founded several communities (Bethlehem, Nazareth, and Lititz). Because of development pressures, they looked for more space to create their church communities. Purchasing just over 98,985 acres (400.58 km2) from John Carteret, 2nd Earl Granville, one of the British Lords Proprietor, in the Piedmont of North Carolina in 1753, they sent groups from Bethlehem, Pennsylvania to begin construction. They founded the transitional settlement of Bethabara, North Carolina (translated as "House of Passage," the first planned Moravian community in North Carolina in 1753, in Bethania, North Carolina) in 1759.

Salem was to be the central town of a 98,985-acre (400.58 km2) tract named Wachovia. Construction began in 1766 to build the central economic, religious, and administrative center of the Wachovia tract. The outlying communities, eventually five in all (Bethabara, Bethania, Friedberg, Friedland, and Hope), were more rural and agriculture focused. Salem and most of the other communities were controlled by the church, which owned all property and only leased land for construction. All people in the communities had to be members of the church and could be expelled from the town if they acted contrary to the community's regulations. The several governing bodies all kept meticulous records; copies were sent to the Bethlehem and Herrnhut archives. Most of this information has been translated and published in the "Records of the Moravians in North Carolina" by the North Carolina State Archives, now comprising 13 volumes. This detailed information is part of the documentation used for the accurate restoration and interpretation of Old Salem and many original documents are still housed in the Moravian Archives.

A local architectural review district was created in 1948 (the first in North Carolina and probably the fifth in the country) to protect the historic remains of what had become a depressed area from encroaching development. In 1950, Old Salem Inc. (a 501(c)(3) not-for-profit corporation) was formed to protect threatened buildings, restore the town, and operate portions of it as a museum.

The town's restored and reconstructed buildings, staffed by living-history interpreters, present visitors with a view of Moravian life in the 18th and 19th centuries. The features include skilled interpreters such as tinsmiths, blacksmiths, cobblers, gunsmiths, bakers and carpenters, practicing their trades while interacting with visitors. Approximately 70% of the buildings in the historic district are original, making this a truly unique living history museum. 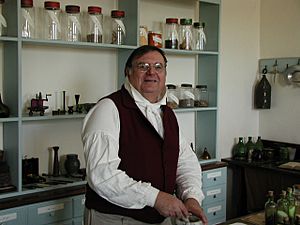 Old Salem also offers a great deal of opportunities for the community to interact with each other by supporting local non-profit venues such as The Cobblestone Farmers Market. The Cobblestone Farmers Market encourages community engagement by creating a space to support low income households. This is accomplished by providing vendors to the community that allow purchases of healthy foods through EBT and SNAP

Starting in December of 2016, substantial historical and archaeological research has focused on Salem's historical African-American population. Moravians educated enslaved members of their community, teaching literacy skills and some professional trades. Holistic studies directed toward understanding ethnicity and cultural identity of African-Americans in Salem have resulted in significant additions to the historical interpretation presented at Old Salem. These additions include newly identified slave dwellings and the updated number of slaves who lived in Salem from 1790-1860.

The goals of this project are to:

A part of Old Salem Museums & Gardens and located in a modern building in the historic district, the Museum of Early Southern Decorative Arts (MESDA) is dedicated to exhibiting and researching the regional decorative arts of the early South. MESDA opened to the public on January 5, 1965. MESDA was a vision shared by two individuals, Frank L. Horton and his mother Theodosia “Theo” L. Taliaferro. They were introducing collectors who have spent most of their lives raising awareness of and appreciating domestic objects made in the south. In its galleries, MESDA showcases the architecture, needlework, furniture, paintings, textiles, ceramics, silver, and other metalwares made and used in Maryland, Virginia, the Carolinas, Georgia, Kentucky, and Tennessee through the early 19th century. The majority of the MESDA collection is accessible online.

Highlights of the town include the Salem Tavern, where George Washington spent two nights (May 31 and June 1, 1791), while passing through North Carolina during his "Southern Tour"; the Single Brothers' House; Boys' School; Winkler Bakery; and a host of restored homes and shops, and several stores including T. Bagge Merchant and the Moravian Book and Gift Shop.

Of note is the St. Philip's Moravian Church complex. Site of an 18th-century graveyard, the (now reconstructed) 1823 'Negro Church' was built following a congregational vote to segregate worship in accordance with North Carolina state law in 1816. Before that the African-Americans who joined the Moravian church attended Home Moravian Church. In 1861, St. Philip's Church was constructed. Now restored, the church was originally built by the Salem congregation for the enslaved and free African-Americans of the community. Completed just before the Civil War in 1861, it is the oldest surviving African-American church built for that purpose in North Carolina. The Emancipation Proclamation was read there to the congregation in 1865 by the chaplain of the 10th Ohio Regiment. The church continued to grow and was expanded in the 1890s. The congregation moved to a new location in 1952 then a third location on Bon Aire Avenue, before returning to hold services in the brick Church in 2019. The building stood vacant from 1952 until its restoration. St. Philip's Church is individually listed on the National Register of Historic Places.

Partially in the Old Salem historic district is the campus of Salem College and Academy, with Main Hall, the Single Sisters' House, the Inspectors House (with the president's office and the college book store) on the Square, and Gramley Library just down Church Street.

Home Moravian Church, while not a part of the official Old Salem tour per se, this functioning congregation opens its sanctuary to visitors on a regular schedule. Still owned by the Salem Congregation, Salem Square, in the center of the district, hosts many special events throughout the year, including a long-running band concert series in the summer. The famous water pump, a restored portion of Salem's circa 1778 waterworks, stands on the southwest corner of the square.

In Salem, the "Easter City," the traditional Moravian Easter Sunrise service has been held annually since 1772 by the Salem Congregation, and draws several thousand people to the Salem Square and Moravian graveyard. The first two weeks of December play host to the Candle Tea, an annual fundraiser for local charities held by the Home Moravian Church Women's Fellowship in the Single Brothers' House.

The Market-Fire Engine House was constructed in 1803 (reconstructed in 1955). Half of it was used as a marketplace for fresh meat, and the other half was used to store fire fighting equipment. The town had been using this equipment since 1785, when the Salem Tavern was destroyed by fire. The fire company is thought to be the first of its kind in North Carolina.

At the north end of the historic district is a large Coffee Pot which is a former tin shop sign, moved when Interstate 40 was built just to the north. 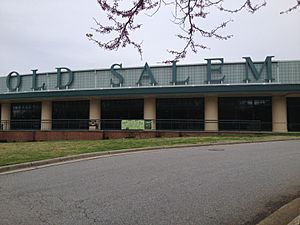 Old Salem's Visitor Center was built in 2003 and is the main location where museum visitors purchase tickets. The building features a large concourse along a serpentine glass wall with interpretive panels about the history of Wachovia and Salem. The preliminary design was developed by Venturi Scott Brown and Associates, with local firm Calloway, Johnson, Moore, and West completing the project. The building also houses a food service, gift shops, and the James A. Gray Jr. Auditorium. The Gray Auditorium is home to the 1800 Tannenberg Organ.

The former 1964 visitor center and parking lot were demolished to allow partial reconstruction of the 18th-century Single Brothers' Garden.

All content from Kiddle encyclopedia articles (including the article images and facts) can be freely used under Attribution-ShareAlike license, unless stated otherwise. Cite this article:
Old Salem Facts for Kids. Kiddle Encyclopedia.