Bethlehem is a city in Lehigh and Northampton counties in the Lehigh Valley region of the eastern portion of the U.S. state of Pennsylvania. As of the 2010 census, the city had a total population of 74,982, making it the seventh largest city in Pennsylvania, after Philadelphia, Pittsburgh, Allentown, Erie, Reading, and Scranton. Of this, 55,639 were in Northampton County, and 19,343 were in Lehigh County.

There are four general sections of the city: central Bethlehem, the south side, the east side, and the west side. Each of these sections blossomed at different times in the city's development and each contains areas recognized under the National Register of Historic Places. ZIP codes that use the address Bethlehem totaled 116,000 in population in the year 2000. These ZIP codes include Bethlehem Township and Hanover Township. 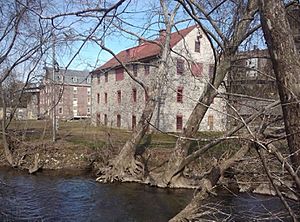 The Colonial Industrial Quarter on the east bank of Monocacy Creek in Bethlehem.

The areas along the Delaware River and its tributaries in eastern Pennsylvania were long inhabited by indigenous peoples of various cultures. By the time of European contact, these areas were the historic territory of the Algonquian-speaking Lenape Nation, which had three main divisions, the Unami, Unalachtigo, and Munsee. They traded with the Dutch and then English colonists in the mid-Atlantic area.

On Christmas Eve in 1741, David Nitschmann and Count Nicolaus von Zinzendorf, leading a small group of Moravians, founded the mission community of Bethlehem along the banks of the Monocacy Creek by the Lehigh River in the colony of Pennsylvania. They came to set up missionary communities among the Native Americans and unchurched German-speaking Christians. They named the settlement after the Biblical town Bethlehem of Judea, the birthplace of Jesus. "Count Zinzendorf said, 'Brothers, how more fittingly could we call our new home than to name it in honor of the spot where the event we now commemorate took place. We will call this place Bethlehem.' And so was Bethlehem named after the birthplace of the Man of Peace.'" (from a letter by Gordon Dent to Mr. T. Donald Bain March 3, 1965 quoting from "Story of Bethlehem Steel" by Arundel Cotter, more details are given in this article) Originally it was a typical Moravian Settlement Congregation, where the Church owned all the property. Until the 1850s, only members of the Moravian Church were permitted to lease land plots in Bethlehem. The historic Brethren's House, Sisters' House, Widows' House and Gemeinhaus (Congregation House) with the Old Chapel are remnants of this period of communal living.

The Moravians ministered to regional Lenape Native Americans through their mission in the area, as well as further east in the New York colony. In the historic Bethlehem God's Acre cemetery, converted Lenape lie buried alongside the Moravians.

In 1762, Bethlehem built the first water-works in America to pump water for public use. While George Washington and his troops stayed in Valley Forge, Washington stored his personal effects at the farm of James Burnside in Bethlehem – as of 1998[update] a historical museum (Burnside Plantation).

The prosperous village was incorporated into a free borough in the County of Northampton in 1845. After the Unity Synod of 1848, Bethlehem became the headquarters of the Northern Province of the Moravian Church in North America.

On March 27, 1900, the Bach Choir of Bethlehem presented the United States debut of German Lutheran Johann Sebastian Bach's Mass in B Minor in the city's Central Moravian Church.

The Blast furnaces of Bethlehem Steel seen in a panoramic view from the north bank of the Lehigh River. South Mountain is in the distance. (c. 1896).

Bethlehem became a center of heavy industry and trade during the industrial revolution. The Bethlehem Steel Corporation (1857–2003), founded and based in Bethlehem, was once the second-largest steel producer in the United States, after Pittsburgh, Pennsylvania-based U.S. Steel. Bethlehem Steel was also one of the largest shipbuilding companies in the world and one of the most powerful symbols of American industrial manufacturing leadership.

Bethlehem Steel began producing the first wide-flange structural shapes made in the United States and they pioneered the production of the now-ubiquitous "I-beam" used in construction of steel-framed buildings, including skyscrapers. It manufactured construction materials for numerous New York and other city skyscrapers, as well as for major bridges.

The company became a major supplier of armor plate and ordnance products during World War I and World War II, including the manufacture of 1,100 warships. After roughly 140 years of metal production at its Bethlehem plant, Bethlehem Steel ceased operations there in 1995, in the face of overseas competition and declining demand.

On December 7, 1937, at a grand ceremony during the Great Depression, Mrs. Marion Brown Grace pulled a large switch to turn on the new Christmas street lights and a large wooden star. Mrs. Grace was the daughter of former South Bethlehem burgess, Charles F. Brown, and wife of Eugene Grace, President of Bethlehem Steel Corporation. Hundreds of citizens attended the ceremony and thousands more listened to the speeches and musical performances on the radio. This was the first year the Bethlehem Chamber of Commerce adopted the nickname "Christmas City, USA".

The Hotel Bethlehem was chosen for the ceremony because it was built on the site of the first building in Bethlehem – a two-room log house – where on Christmas Eve 1741, the original settlers conducted their evening worship. As their benefactor, Count Zinzendorf, observed the farm animals that shared the space and listened to them sing the hymn, "Not Jerusalem, But Lowly Bethlehem", he proclaimed the name of the settlement to be Bethlehem. The people gathered at the 1937 ceremony heard the same words when the Bach Choir sang the old German hymn, "Jesu, Rufe Mich (Jesus, Call Thou Me)", by Adam Drese. 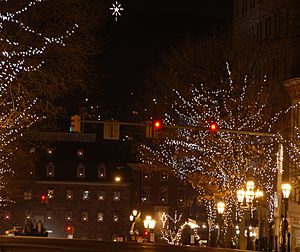 The star of Bethlehem viewed from Main Street at night, in 2007. The Hotel Bethlehem is located on the right side of the street.

The Bethlehem Globe-Times paid for the large wooden star erected on the top of South Mountain, at a cost of $460. The original star was created with four wooden planks, overlapped to create an eight-point star, 60 feet high by 51 feet wide, mounted on two wooden poles, and lit by 150 50-watt light bulbs. The installation of the star was done by Pennsylvania Power and Light and the Bethlehem Water Department. The star was erected on the top of South Mountain, on property owned by the Water Department, located in Lower Saucon Township.

In 1939, the wooden star was replaced with a star made of Bethlehem steel, at a cost of $5,000. It had eight rays, with the main horizontal ray 81 feet wide and the main vertical ray 53 feet high. In 1967, the current star, 91 feet high, was installed on the old steel frame and set in a concrete base 25 feet wide by 5 feet deep. Plexiglas was installed to protect the 250 50-watt light bulbs. In the summer of 2006, the city repaired the base. A crew of municipal electricians changes the bulbs every two years. Beginning in the mid-1990s, the star was lit from 4:30 p.m. until midnight, every day of the year.

During World War II, from 1941 to 1945, none of the Christmas decorations in Bethlehem were lit. City officials said the lit star made "too good of an air raid target" away. The star has become an important symbol for Bethlehem. 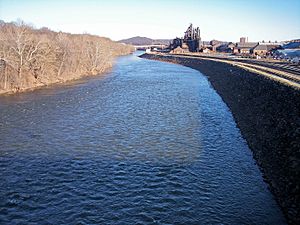 The Lehigh River in Bethlehem in 2007. 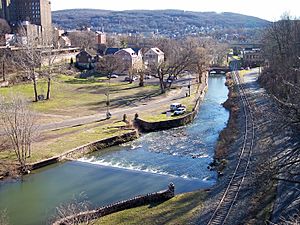 Monocacy Creek near downtown Bethlehem in 2007.

Because large volumes of water were required in the steelmaking process, the city purchased 22,000 acres (8,900 ha) of land in the Pocono Mountains, where its water is stored in reservoirs.

Bethlehem's climate falls in the humid continental or minimal criteria of the humid subtropical climate zone, depending on the preferred January isotherm. Summers are typically hot and humid, fall and spring are generally mild, and winter is cold. Precipitation is distributed throughout the year, with thunderstorms in the summer, showers in spring and fall, and snow in winter. The average high temperature varies widely, from 36 °F (2 °C) in January to 84 °F (29 °C) in July. The highest recorded temperature was 105 °F (41 °C), while the lowest recorded temperature was −16 °F (−27 °C).

Bethlehem falls under the USDA 6b Plant Hardiness zone. 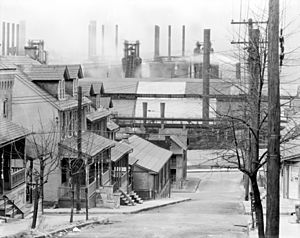 South Bethlehem in 1935, looking north to houses and Bethlehem Steel

Bethlehem is divided into four main areas: Center City, West Side, East Side, and South Side. The West Side is located in Lehigh County, while the other three neighborhoods are located in Northampton county.

The city is served by Lehigh Valley International Airport, which also serves Allentown, Pennsylvania and the greater Lehigh Valley.

The city is famous for its annual Musikfest, a largely free, ten-day music festival that draws over a million people to the city each August. Other festivals include The Celtic Classic, which celebrates Celtic culture, food and music, and the SouthSide Film Festival, a non-competitive, not-for-profit film festival. The city has also been the past, and current host of the North East Art Rock Festival, or NEARFest, a popular 3-day Progressive rock music event.

The Bethlehem Area Public Library is a popular destination for recreation and entertainment. The Banana Factory houses studios of area artists and is open to the public every first Friday of the month. Touchstone Theatre, also on the SouthSide, houses the Valley's only professional resident theatre company, producing and presenting original theatre performances. 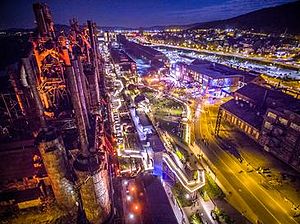 Historic Bethlehem features many specialized boutiques, spas and nightclubs along its main streets.

On the first Friday of the month, the businesses of the Southside Shopping District hosts First Friday, a celebration of arts and culture. Stores, restaurants and art galleries stay open late and offer special discounts, refreshments, gallery openings and more.

Lehigh University's Zoellner Arts Center offers a variety of musical and dramatic events through the year.

The city is the location of Pennsylvania's largest casino, the Sands Casino Resort Bethlehem, located on the former Bethlehem Steel property.

The Lehigh Canal provides hiking and biking opportunities along the canal towpath which follows the Lehigh River in Bethlehem.

The western part of the former Bethlehem Steel site was selected as a filming location for the movie Transformers: Revenge of the Fallen, which was released in 2009. In the film, the Steel's blast furnaces and surrounding area are used for the opening sequence of the film to represent Shanghai.

In spring 2011, the city opened Steel Stacks, a ten-acre campus that showcases music, art, festivals, films and educational programming throughout the year. It is located in the backdrop of the blast furnaces of the former Bethlehem Steel plant.

All content from Kiddle encyclopedia articles (including the article images and facts) can be freely used under Attribution-ShareAlike license, unless stated otherwise. Cite this article:
Bethlehem, Pennsylvania Facts for Kids. Kiddle Encyclopedia.