The Hill to Hill Bridge is a road crossing of the Lehigh River linking the south and north sides of Bethlehem, Pennsylvania. Completed in 1924, the bridge carries Pennsylvania Route 378 from Wyandotte Street on the city's south side to a series of ramps and viaducts on the north side. It replaced a two-lane covered bridge and eliminated several grade crossings of three railroads on the two banks of the Lehigh River. The Hill to Hill Bridge is located in the Central Bethlehem Historic District, listed on the National Register of Historic Places in 1972, with a Boundary Increase in 1988.

Prior South Side-North Side crossing

Prior to Bethlehem's incorporation as a city in 1917, the north side and the south side were independent municipalities. During the latter part of the 1910s, three bridges crossed between Bethlehem and South Bethlehem: the Minsi Trail bridge, the New Street bridge, and the Main Street covered bridge. The Main Street bridge was narrow and was regularly damaged by floods and ice. It crossed several tracks of the Lehigh Valley Railroad and the Reading Railroad on the south side as it led to Wyandotte Street. The Pacific Hotel stood between the southern portal to the covered bridge; the adjacent image shows the active freight and passenger railroad tracks travelers crossed to reach the bridge. To the right (not visible) was Union Station (or Union Depot), the passenger station of the Lehigh Valley and Reading Railroads with service to Buffalo, Harrisburg, New York (Jersey City), and Philadelphia. 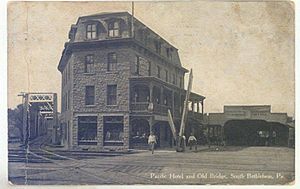 On the north side, it crossed the Lehigh Coal and Navigation Canal and the tracks of the Central Railroad of New Jersey before continuing up Seminary Hill (named for the Moravian Church's Female Seminary) to the Main Street business district.

Community leaders found the covered bridge to be a barrier to commerce between "the Bethlehems". As a result of the consolidation of the two municipalities into a single city, sufficient resources became available to design and construct a new bridge connecting Fountain Hill and Seminary Hill.

Construction on the Hill to Hill Bridge began on August 1, 1921, after many previous plans. As constructed, the bridge had nine approaches, eleven abutments, forty-eight piers, and fifty-eight spans. It was considered an engineering marvel of its time. By September 1924, the bridge was complete and provided safe, grade-separated connections between the two halves of the city.

The structure of the Hill to Hill Bridge was modified significantly during the years after World War II. The first significant change to traffic on the bridge came during the construction of the expressway portion of Route 378 north of the bridge, known locally as the "Spur Route". Initially, the Second Avenue ramp on the north side was closed in 1967. In 1968, the expressway portion was opened.

The Hill to Hill Bridge today

The bridge saw extensive repairs in 1990, and was painted in spring of 2009. The painting process had caused two of the four traffic lanes to be closed, and had resulted in major traffic congestion. The painting project was finished in time for the opening of the Sands Casino Resort Bethlehem (now Wind Creek Bethlehem).

The bridge is noted for its many ramps and branches. It was designed by Clarence W. Hudson and its structure makes use of "a combination of steel through truss and concrete closed spandrel deck arch spans" A unique characteristic of the bridge was the design of the two truss spans, needed to provide clearance over the railroads. Because the Second Street ramp intersected the bridge at the point of the southern truss span, the normal diagonal trusses could not be included. Engineer C.W. Hudson designed an alternative truss configuration, now known as the Hudson truss, which allowed an opening in the truss web between its vertical members. This bridge's spans are the only known examples of this truss configuration.

1924 (original) ramps and overcrossings from south to north 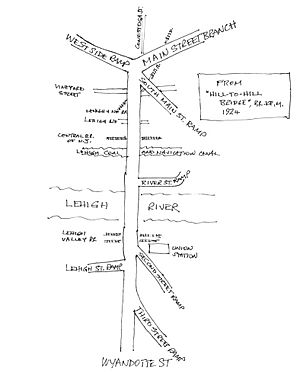 Sketch schematic of Hill-to-Hill Bridge approaches and overcrossings as of opening date in 1924.

Current ramps and overcrossings from south to north 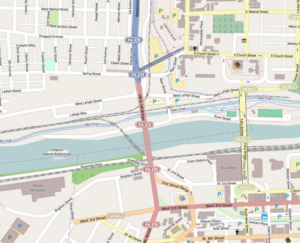 All content from Kiddle encyclopedia articles (including the article images and facts) can be freely used under Attribution-ShareAlike license, unless stated otherwise. Cite this article:
Hill to Hill Bridge Facts for Kids. Kiddle Encyclopedia.