The Central Railroad of New Jersey, also known as the Jersey Central or Jersey Central Lines (reporting mark CNJ), was a Class I railroad with origins in the 1830s. It was absorbed into Conrail in April 1976 along with several other prominent bankrupt railroads of the northeastern United States.

The Elizabethtown and Somerville Railroad was chartered on February 9, 1831, to build from Elizabeth on the Newark Bay (with a steamboat transfer to New York City) west to Somerville. The line to Plainfield was completed in March 1839, connecting to the New Jersey Rail Road in Elizabeth. Extensions took it west to Dunellen in 1840, just east of Bound Brook in 1841 and to Somerville in 1842. 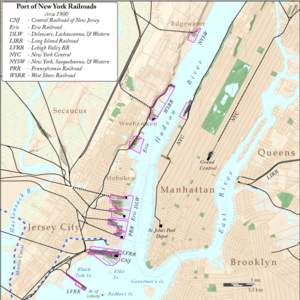 Map of CNJ and other terminals in New York region ca. 1900

The rest of the line to Phillipsburg opened in 1852, and on September 8, 1855, the upper level of the Lehigh Valley Railroad's Easton Bridge over the Delaware River, extended the CNJ to Easton. At that time, Lehigh Valley coal trains began running over the CNJ to Elizabeth. A similar operation with the Delaware, Lackawanna and Western Railroad, joining at Hampton, began May 27, 1856. This required the addition of a third rail as the DL&W was 6 ft (1,829 mm) broad gauge.

On December 1, 1859, the CNJ arranged to run over the New Jersey Rail Road to the latter's terminal in Jersey City. That operation began December 19, and included a third rail for DL&W trains.

The South Branch Railroad, controlled by the CNJ, opened July 1, 1864, as a branch from Somerville to Flemington. The CNJ's extension to its new terminal in Jersey City, including the first CRRNJ Newark Bay Bridge, opened on July 29, 1864, with a ferry transfer to Cortlandt Street in New York City, ending operations over the NJRR. On July 23, 1869, the Newark and New York Railroad opened, providing a straight route from downtown Newark to the CNJ's Jersey City terminal. The Newark Branch, running north from Elizabethport to the N&NY in Newark, opened June 7, 1872. 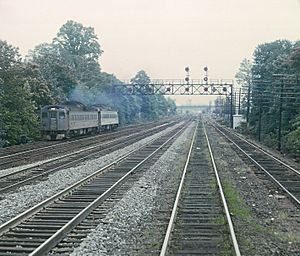 A train on the CNJ's mainline near Plainfield, New Jersey in 1969 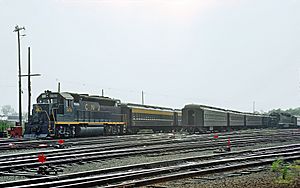 A CNJ commuter train at Bay Head station in 1971 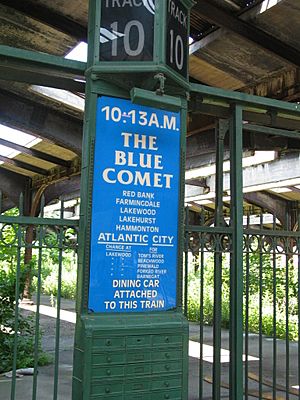 Reproduction of a tablet designator for the CNJ Blue Comet

In late 1917, the following companies were absorbed into the CNJ:

A CNJ camelback locomotive built by Baldwin in the 1920s

In 1901 the Reading Railroad gained control of the CNJ, which lasted until the creation of Conrail on April 1, 1976.

The first commercially successful diesel-electric locomotive, manufactured by Alco in 1924, was built for the Central Railroad of New Jersey.

In 1929 the CNJ began operating its most famous train, the Blue Comet, from Jersey City to Atlantic City. It ran until 1941.

The Interstate Commerce Commission (ICC) authorized the CNJ to acquire the Wharton and Northern Railroad and the Mount Hope Mineral Railroad on February 4, 1930.

The Hibernia Mine Railroad was merged into the CNJ on November 25, 1930.

CNJ had its northeastern terminus at Elizabethport, New Jersey. In 1864 CNJ extended its railroad across the bay into Bayonne, and north to the Jersey City terminus. It had used a succession of bridges over the years, the last being Newark Bay Bridge, demolished in the 1980s.

From Elizabethport, trains went to different corridors. One headed towards Elizabeth and Plainfield and points west and southwest. The second went south towards Perth Amboy and today's North Jersey Coast Line and different southern New Jersey destinations. CNJ operated several trains into Pennsylvania and other points west or south, in association with the RDG. B&O also used CNJ tracks for the final approach to Jersey City.

For more details, see List of stations on the Central Railroad of New Jersey

CNJ operated several named trains, most of which were interstate operations:

As a part of Norfolk Southern's 30th anniversary in 2012, the company painted 20 new locomotives into predecessor schemes. NS #1071, an EMD SD70ACe locomotive, was painted into the Central Railroad of New Jersey orange and blue.

The Delaware Lackawanna Railroad in Scranton, Pennsylvania restored a CNJ RS-3 locomotive and has added it to its heritage fleet.

All content from Kiddle encyclopedia articles (including the article images and facts) can be freely used under Attribution-ShareAlike license, unless stated otherwise. Cite this article:
Central Railroad of New Jersey Facts for Kids. Kiddle Encyclopedia.