Star of Bethlehem facts for kids 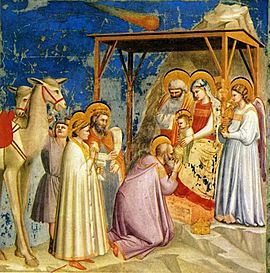 Adoration of the Magi by Florentine painter Giotto di Bondone (1267–1337). The Star of Bethlehem is shown as a comet above the child. Giotto witnessed an appearance of Halley's Comet in 1301.

The Star of Bethlehem, also called the Christmas Star, is a star in the Bible and Christian tradition that let the Magi know that Jesus was born, and later helped them go to Bethlehem. According to the Gospel of Matthew, the star made the magi travel to Jerusalem. There they met King Herod of Judea, and asked where the king of the Jews had been born. Herod's advisors said that the Messiah would be born in Bethlehem, a nearby village, because of a prophecy in the Book of Micah. While the magi were going to Bethlehem, they saw the star again. The star stopped above the place where Jesus was born. There, the magi saw Jesus with his mother, worshipped him and gave costly presents to him. They then returned to their "own country".

Christians usually think of the star as a miraculous sign to show the birth of the Christ. Astronomers have thought of many different explanations for the star. A nova, a planet, a comet, an occultation, and a conjunction (planets coming together) have all been suggested.

Some scholars say that the story is not historically right and that the star was not real.

The Star of Bethlehem is a well-loved subject at planetarium shows during Christmas, but the Bible seems to suggest that the magi visited Jesus at least several months after he was born. The visit is usually celebrated on Epiphany (January 6) in Western Christianity and on Christmas (December 25) in Eastern Christianity.

The Gospel of Matthew says that Magi (usually translated as "wise men", but probably meaning here "astronomer" or "astrologer") came to the court of Herod in Jerusalem and told the king of a star which marked the birth of the King of the Jews:

Now after Jesus was born in Bethlehem of Judea in the days of Herod the king, behold (see), wise men from the East came to Jerusalem, saying, Where is He who has been born King of the Jews? For we have seen His star in the East [or at its rising] and have come to worship Him. When Herod the king heard this, he was troubled, and all Jerusalem with him. And when he had gathered all the chief priests and scribes of the people together, he inquired of them (asked) where the Christ was to be born.

Then Herod, when he had secretly called the wise men, determined from them what time the star appeared. And he sent them to Bethlehem and said, Go and search carefully for the young Child, and when you have found Him, bring back word to me, that I may come and worship Him also. When they heard the king, they departed (went away); and behold, the star which they had seen in the East went before them, till it came and stood over where the young Child was. When they saw the star, they rejoiced with exceedingly (very) great joy.

Matthew suggests that the magi knew from the star that the "king of the Jews" had already been born even before they entered Jerusalem. They gave Jesus gold, frankincense, and myrrh as presents. The magi were told in a dream not to go back to Jerusalem. So, they "left for their own country by another road". When Herod found out that he had been tricked, he ordered all male children in Bethlehem who were 2 or younger to be killed. Joseph was warned in a dream to escape. He took his family to Egypt to be safe. The Gospel connects the escape to a verse from the Old Testament, which is seen as a prophecy: "Out of Egypt I called My Son." The Old Testament verse was about how the Hebrews went away from Egypt, led by Moses. Because of this, the quote seems to suggest that Matthew thought that Jesus' life was like the story of the Jewish people. Judea could have symbolized Egypt and Herod represented pharaoh. After Herod died, God called Joseph and his family back from Egypt, and they settled in to Nazareth in Galilee.

Discovering the year Jesus was born

One way to interpret the Star of Bethlehem is to find the year in which Jesus was born. Matthew wrote that Jesus was born when Herod was king. According to Josephus, Herod died shortly after a lunar eclipse. This lunar eclipse is often thought of as the eclipse of March 13, 4 BC. Those who ruled after Herod used coins showing that they dated their rules as beginning in 4 BC. Because of this, it is mostly thought that Herod died that year. However, some still disagree with this idea.

From long ago, many people believed that the movements of the stars were connected with the things that happened on earth. Miracles were often thought to happen at the same time important people were born.

The Star of Bethlehem is traditionally linked to the Star Prophecy in the Book of Numbers:

I see Him, but not now;
I behold Him, but not near;
A Star shall come out of Jacob;
A Scepter shall rise out of Israel,
And batter the brow of Moab,
And destroy all the sons of tumult.

By the time the Gospels were written, it was thought by many people that it was about the coming of a Messiah. For example, Josephus quoted it (though he thought it was about Emperor Vespasian).

Paintings and other works of art about the magi's visit may include the star. In the fresco by Giotto di Bondone, it is in the shape of a comet. In a tapestry about the Magi, designed by Edward Burne-Jones, the star is held by an angel.

Christmas songs often describe the Star of Bethlehem. For example, We Three Kings has the words:

All content from Kiddle encyclopedia articles (including the article images and facts) can be freely used under Attribution-ShareAlike license, unless stated otherwise. Cite this article:
Star of Bethlehem Facts for Kids. Kiddle Encyclopedia.