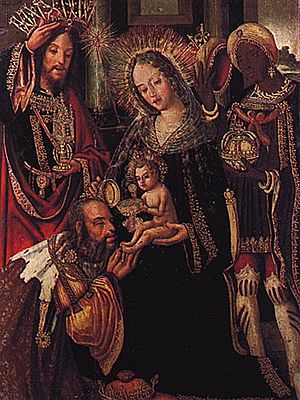 The Magi were "wise men from the east" who came to Jerusalem during the reign of Herod : 'saying, Where is he that is born King of the Jews?' ( Gospel of Matthew chapter 2 verse 1) Their visit to Jesus, guided by the Star of Bethlehem is celebrated every year at Epiphany on January 6, just after Christmas. The Epiphany marks the end of the liturgical season 'Christmas'.

All content from Kiddle encyclopedia articles (including the article images and facts) can be freely used under Attribution-ShareAlike license, unless stated otherwise. Cite this article:
Magi Facts for Kids. Kiddle Encyclopedia.