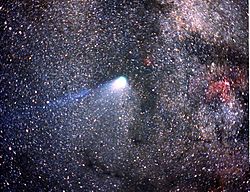 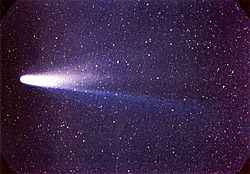 Halley's Comet (Comet Halley) is a comet which comes round every 75 or 76 years. When it is near, it can be seen with the naked eye. It will return in 2061.

The comet is named after Edmond Halley (1656–1742), an English astronomer, who predicted the comet's return. Halley's Comet was the first comet to be recognized as periodic. (Periodic means that it comes by Earth regularly.)

When the comet came close to the Earth in 1986, it was visited by several space-probes. The probe Giotto from the European Space Agency managed the closest approach to the comet.

The number of years that the comet finishes its full cycle can vary depending on the effect of another planet's gravitational pull.

In 1986, Halley's Comet was the first to be observed in detail by spacecraft. It gave the first data on the structure of a comet nucleus and how the coma (nebulous envelope around the core or nucleus) and the tail formed. These observations supported Fred Whipple's "dirty snowball" model. This correctly predicted that Halley would be composed of a mixture of volatile ices – such as water, carbon dioxide, ammonia, – and dust. The missions also adjusted these ideas. For example, it is now known that the surface of Halley is mostly dusty, non-volatile materials, and that only a small portion of it is icy.

All content from Kiddle encyclopedia articles (including the article images and facts) can be freely used under Attribution-ShareAlike license, unless stated otherwise. Cite this article:
Halley's Comet Facts for Kids. Kiddle Encyclopedia.